Recap: ARC Music Festival knocks it out of the park in second year 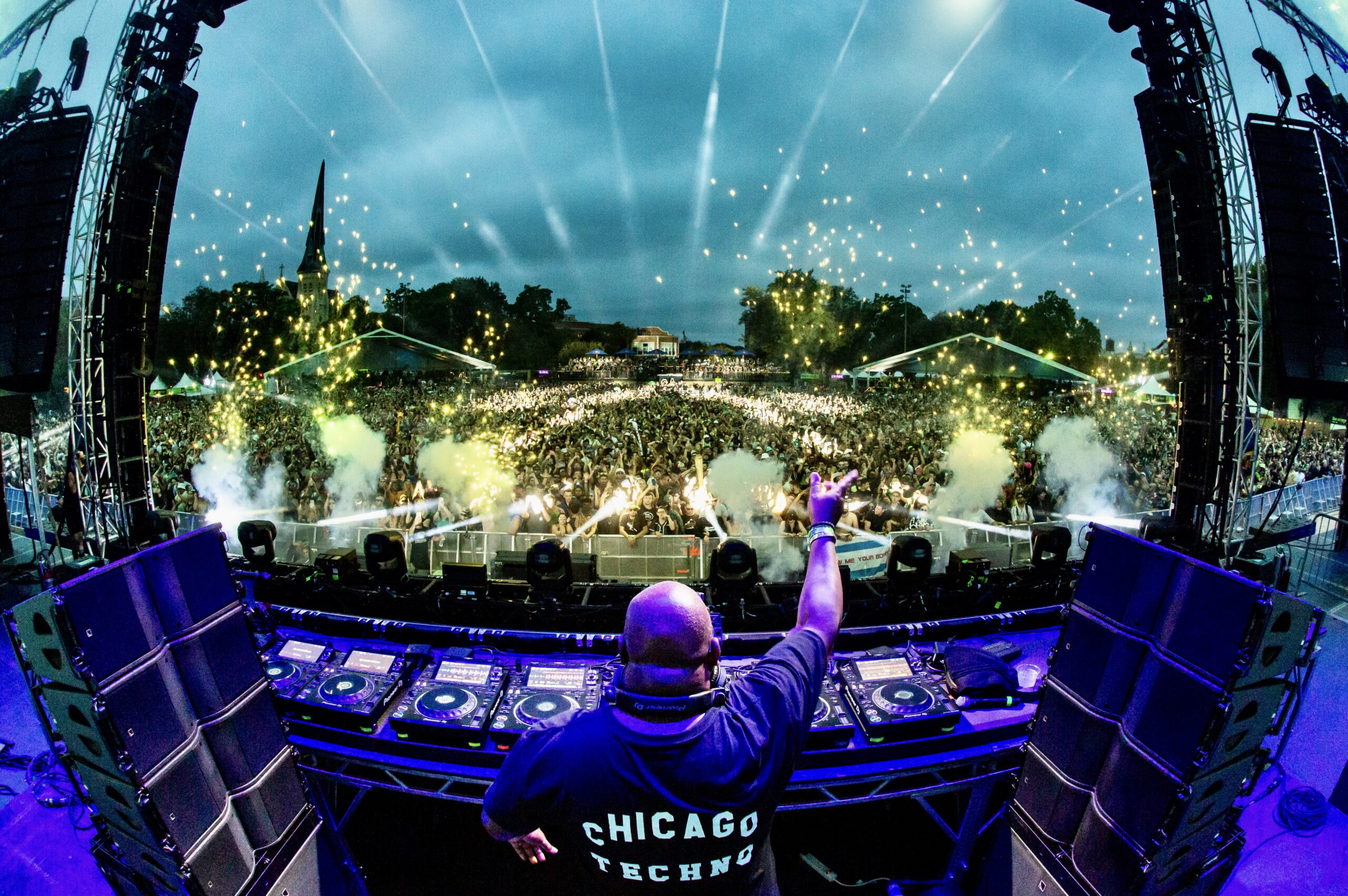 “Chicago is, also, as I like to point out frequently, one of America’s last great NO BULLS**T zones. Pomposity, pretentiousness, putting on airs of any kind, douchery and lack of a sense of humor will not get you far in Chicago.”
– Anthony Bourdain

I don’t know of any place in the world that serves realness on the scale that Chicago does, anywhere. And in that culture, the stuff that is made usually revolves around making it for the sake of making it.

Chicago artists do the stuff the way they do it, because that’s the way they like to do it. Not to create a better, more sellable product. Not to become more popular. But just in the interest of the thing itself.

This is how long form improv comes along because, f*ck it, we’re just going to make it up as we go — it’s fun. It’s how you get a hot dog made out of rattlesnake meat at Hot Doug’s (well, formerly) or with peppers and a pickle on it, or a pizza that’s basically a lasagna. It’s why the ethos of Steppenwolf is about simply being honest on stage. A guy from Chicago went on Shark Tank and won an investment from Mark Cuban for his business of stick figure cats. I don’t know any other city that could come from. 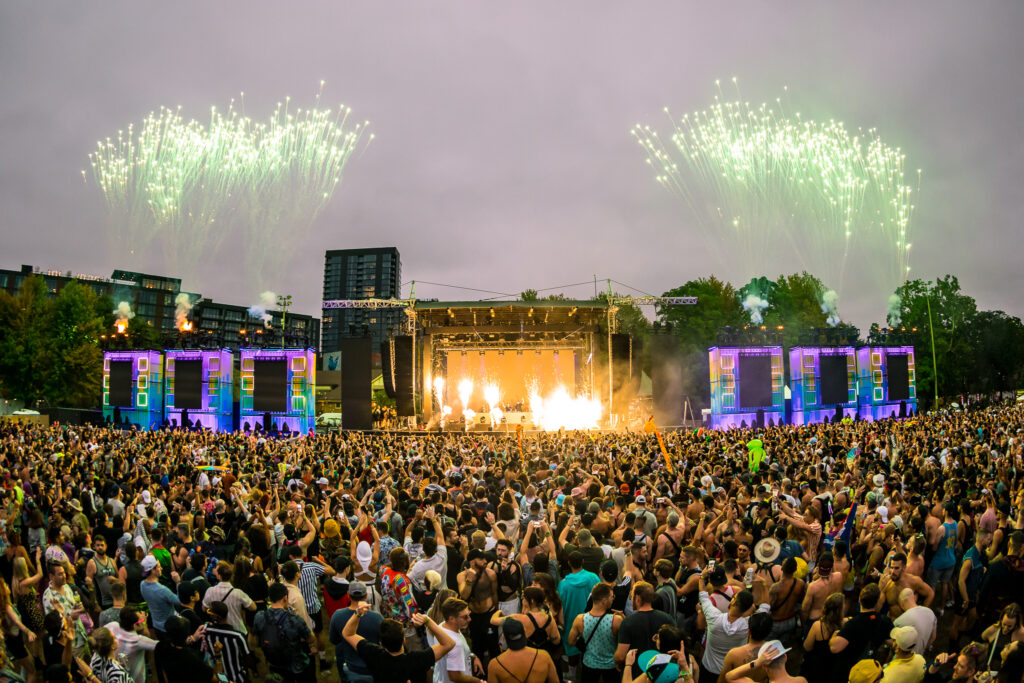 The producers of ARC Music Festival have taken this same ethos and applied it to running a dance music festival. The people running this are really into dance music and rave culture, and they know exactly what they’re doing. Instead of simply picking the most popular artists who will sell the most tickets, they want to put up the best DJs in the world who are as authentic about it as they are.

This is the difference between putting on a good party and putting on a more profitable one. Not mutually exclusive, of course, but definitely more rewarding when you focus on one as opposed to the other. Hiring people who are smart about their craft, people who innovate, and, of course, hiring legends of the genre pays dividends you can measure in ounces of fun. 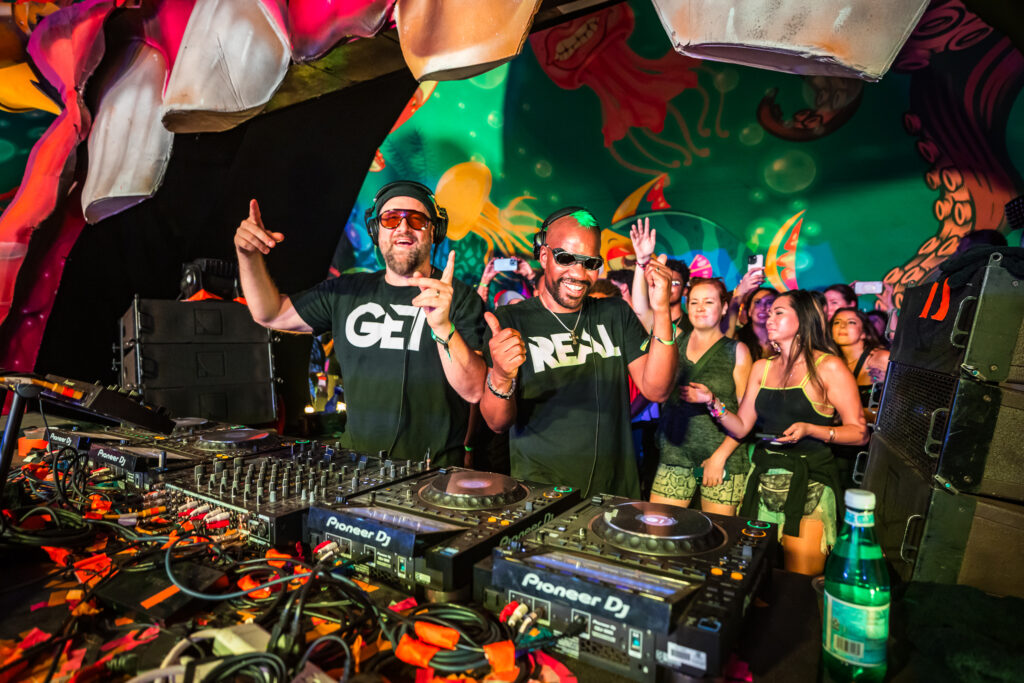 You will not see a DJ doing the same formulaic build every five minutes at this festival. The DJs almost never talk into the mic (Carl Cox’s ‘oh yes oh yes!’ barely counts). It’s about the music, the environment, the people.

They curate artists that are into it for the love of the game itself, the Chicago way. And that’s why it works.

Their Expansions stage on Friday featured fantastic techno for six straight hours from Pan-Pot, Sama Abdulhadi, Anna, and Richie Hawtin. Saturday saw a blistering set from Carl Cox followed by Charlotte DeWitt injecting the crowd into the heart of a Berlin night club. 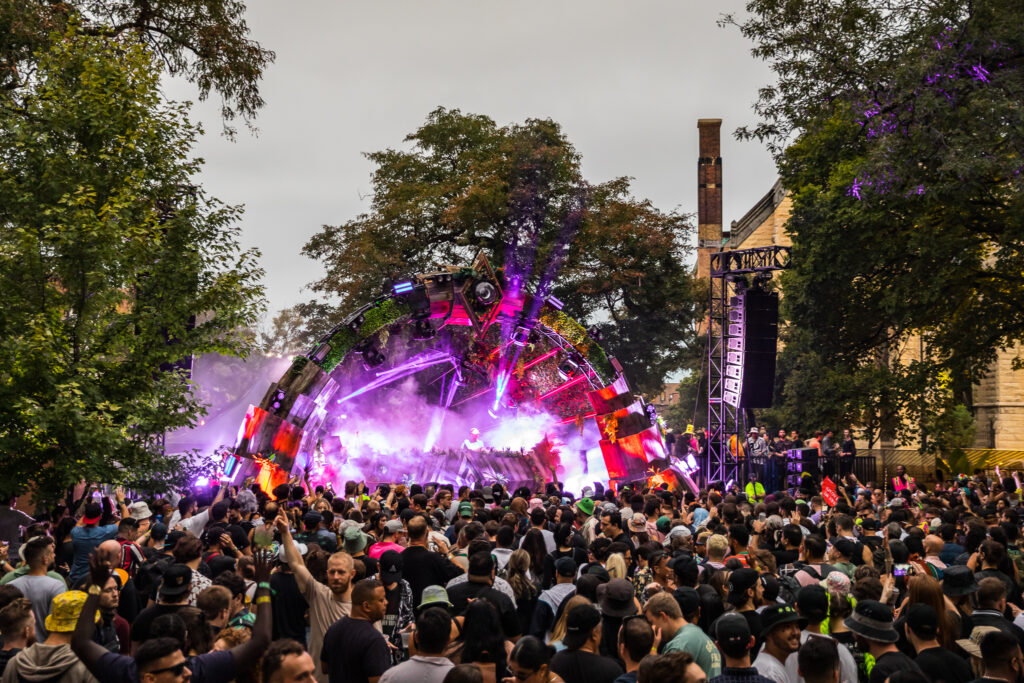 I left after a bit of Charlotte because I wanted to see something I could only see there — someone working with the crowd in the moment, a master of their tools, spinning in a way only they spin, representing this city in this city.

And Honey Dijon delivered all of that in spades, clubs, and hearts.

Her set had themes, classic tracks, and took the crowd on a house music journey through gospel, jazz, hip hop, and beyond. By the end she was playing discordant melodies and beats that made me say out loud to myself “What the f*ck am I even dancing to right now?” It was an absolutely brilliant set and my favorite of the weekend. 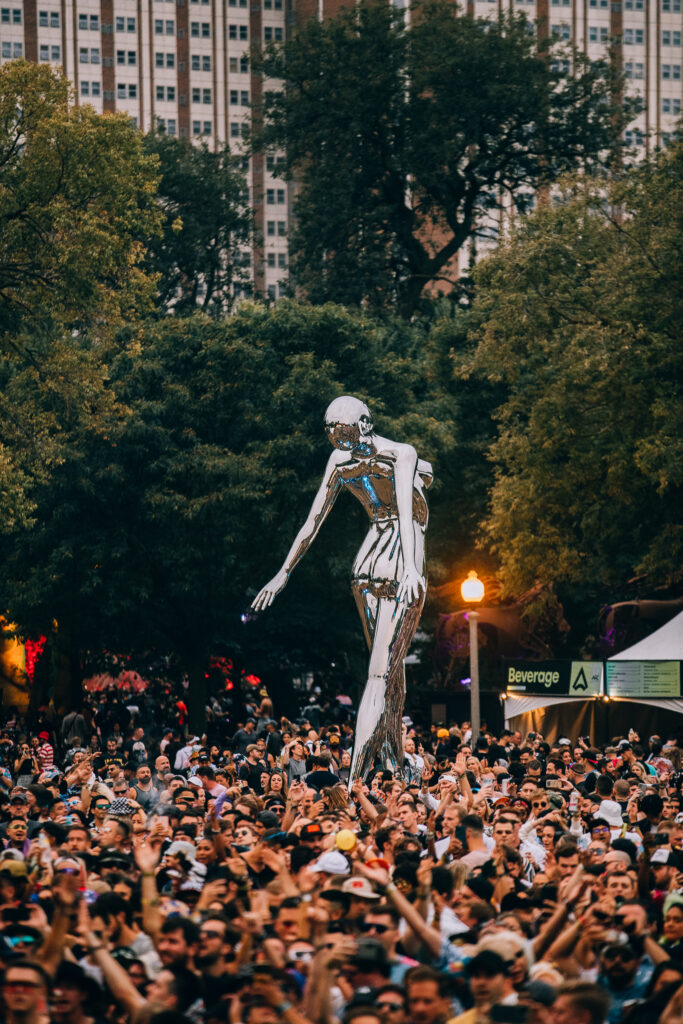 Sunday I saw good sets from Acid Pauli and Claptone (I got there late because I went to the Paco Osuna after party the night before and, boy, did I have fun) and only skipped Fatboy Slim because I saw him a few months ago in San Francisco and will be seeing him again at Portola festival. I’m glad I did, because the Cirez D/Adam Beyer set absolutely blew my mind. Having a back-to-back set as a headliner for the festival on the main stage was an absolute stroke of genius from the people at ARC. Bravo.

The back-toback matchups were incredibly well curated. Only people who are into these DJs and this music would know to match them up the way they did. The production values were excellent from Elrow’s immersive, psychedelic, confetti-filled environment. The Grid main stage’s wide array of screens, lasers, projections, fireballs, and fireworks. And the expansions stage which felt like dancing in an Ewok village with flashing lights and lasers. 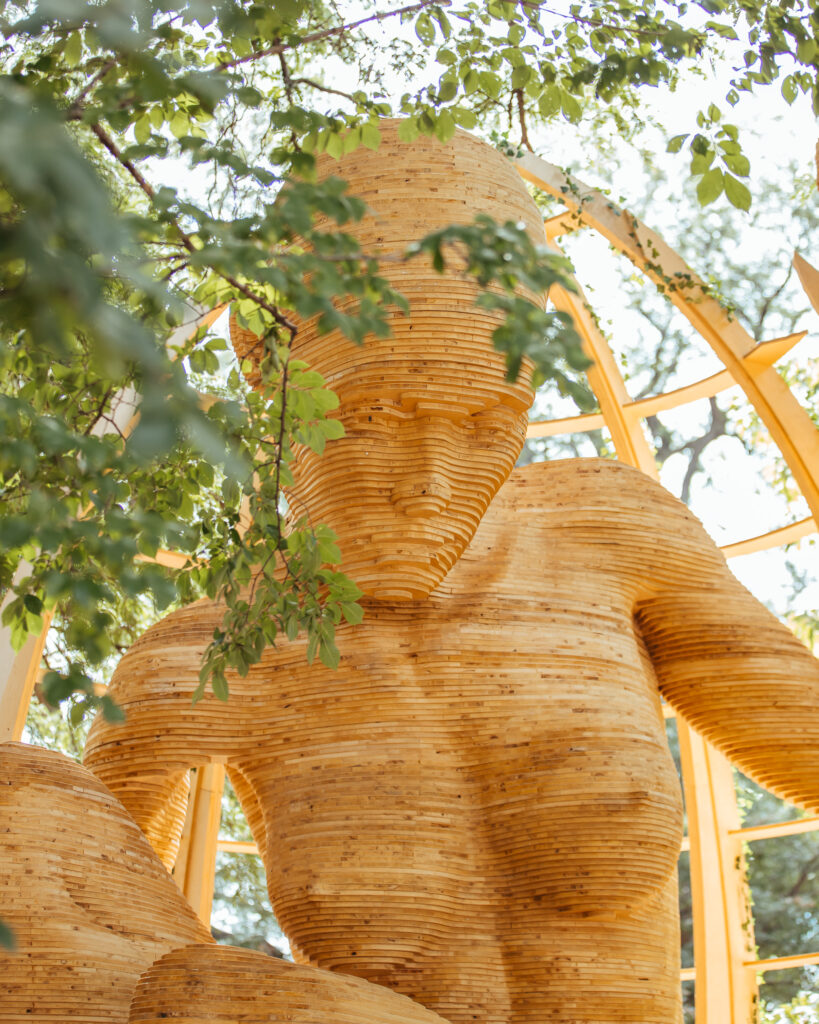 Water was quick to access and easy to find. I never waited very long for the bathroom. You can travel between stages with relative quickness. Sound bleeding  is a slight problem.

But the best part of the festival is truly the crowd itself. I think the people at Auris Presents know the crowd they are attracting with the artists they hire. Everyone understood exactly what type of environment you need to create so that everyone can have a good time.

The crowd was diverse in age, color, orientation, body types, fashion, and taste but throughout the weekend they seemed united in one rule: Everyone is welcome unless you make anyone else feel unwelcome. We are here to have fun, and that means acceptance and love. 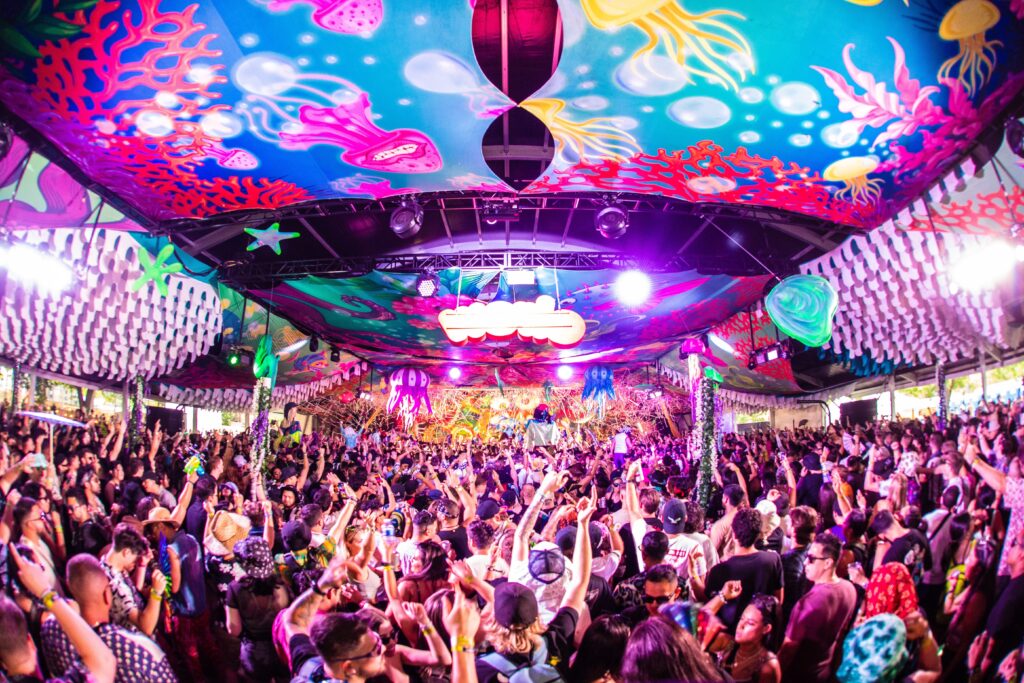 I celebrated my 40th birthday at ARC this year, and I have been a dance music nerd my whole life. Without getting too belabored into my history, let’s just say that I once opened for some great names and I still get excited about hi-hat patterns.

I have been to many festivals and events for decades. I say all this so that you may lend me some credibility and weight and believe me when I say ARC Music Festival knocked it out of the f*cking park.

HUMBLE SUGGESTIONS: Make sure the advertising materials continue to attract this type of audience. This festival is about to get extremely popular as people come to get a taste of something that cannot be replicated or manufactured, and so there is a greater chance that people who don’t get what I would call “PLUR-type” values will show up. The crowd is what makes this festival truly great. ARC has already done some of this with material instructing attendees not to clack fans and insisting that “you are an adult, act like one.” I’m not a marketing guru, so please do whatever you need to do to make sure the people you are trying to attract remain like the ones who just did. 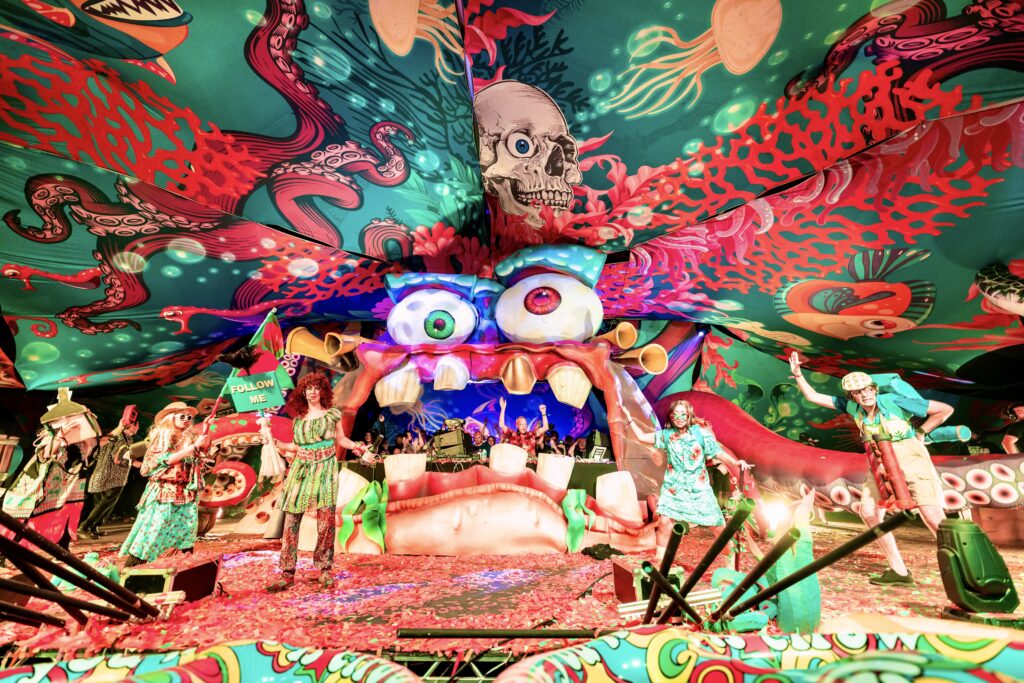 Fans or better air circulation is needed at the Elrow stage. It’s an oven in there.

Radius/Cermak need places to sit down at after parties. Good lord in heaven, we have been dancing all day.

Some suggestions for next year’s artists (sticking with those I have not seen requested much elsewhere): Gerd Jenson, Fred Again, Floorplan, The Belleville Three, Sven Vath, Laurent Garnier, Arman Van Helden, Jeff Mills, and Purple Disco Machine. Marc Rebillet would be a really fun choice. Too Many Zooz would be a very unique and successful choice with this type of audience. The Chemical Brothers also put on awesome (and rare) DJ sets and I will dig my way to the festival if that’s what it takes to see them.

This is going to become a festival that artists are going to want to play at for street credibility. The word of mouth on this festival is going to be so good that next year I would be surprised if it didn’t sell out in minutes. I had the absolute time of my life.

This festival could have only ever been created here, and Chicago should be proud to host it.

ARC Music Festival will again be held over Labor Day Weekend in 2023: Sept. 1-3. Presale tickets are on sale now.