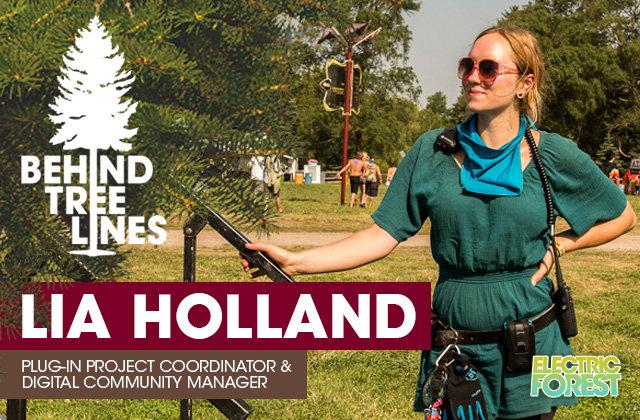 Ever wonder who’s replying to all your Electric Forest Tweets and comments? Or who might be responsible for putting The Glitch Mob in a hot air balloon with a lucky contest winner?

Lia’s been a part of the Electric Forest team for three years and has worked mostly with the development of the Plug-In Program, which provided ways for fans to engage with and contribute to the overall Forest experience. She’s also the digital community manager, helping to curate the online Forest experience when the physical Forest sleeps the remainder of the year.

We caught up with Lia to talk about her role, get a sneak peak at this year’s new additions, and garner some advice for first-time attendees too.

Tell us a bit out how you got started with Electric Forest and your role today. I first got involved in 2012. I had done some work with Madison House for other events, including Bassnectar’s ambassador program. I had been involved in community projects and big ideas on bringing people together and allowing fans to help create the experiences they love so much. Jeremy Stein — Electric Forest’s visionary — later said he had an idea for a new project at Electric Forest, which is known as the “Plug In” program. We did a king and queen program and a few others. It was really successful and of course I love the event because it’s just magical. Now we’re in year three and are starting to do some big things.

You have another role in the Forest as well, right? This year I’m also one of the digital community managers so I also help to manage the Facebook and Twitter profiles and other social media outlets. It takes a lot of time and energy but it definitely doesn’t feel like work. I love conversing with our fans. We have an amazing community and being in this role makes me love it that much more.

How do you craft that content? There are really two sides to Electric Forest: the bright, community daytime aspect and the dark, party festival aspect. We’re always going back and forth about maintaining a balance between dark and light to accurately communicate what this culture is all about.

What new things can we expect this year on the Plug-In side? Last year we started an art installation sponsorship program which was inspired by Burning Man ideas of radical participation and also by fans sending messages to us with ideas. So we created a space for those people to come and do art — many of them for the first time at a festival or professionally. In 2013 we accepted three installations that were very different but all very successful. The winner of the contest was a giant projection-mapped brain that was just mind boggling. All of the people on these projects were just so amazing to work with so the grant program is going to be coming back year after year.

I won’t reveal too many secrets for this year but we’re excited to have the addition a projection-mapped cube installation. There will be many different ways to interact with the cube in the Forest. I can’t wait for people to see it.

What’s your biggest obstacle? Having to say no to people who bring ideas to us. There are so many great ideas and we want to bring all of them but it’s just not always possible. But I do keep trying to come up with ways to get everyone included.

What’s your personal favorite part of all this? I get to be the girl with all the toys! Last year with our king and queen contest I got to help them give away prizes and decorate the golf carts. It’s easy for the staff to get caught up in all the details of festival production so talking about these projects also provides a nice break for all of us. 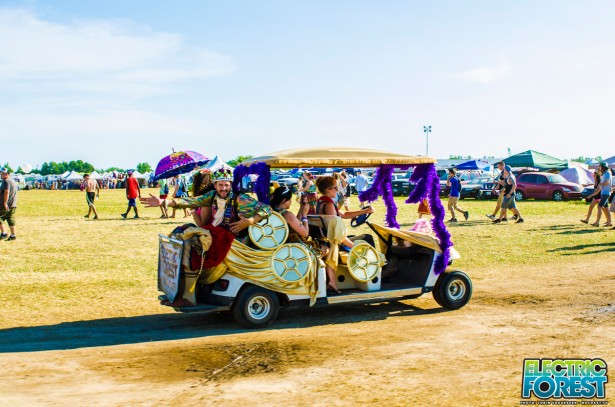 What’s up with this hot air balloon? Well we found a regional balloon guy and convinced our insurance company that this was, in fact, a great idea. We’re going to be sending a couple of very, very lucky fans up into the air with The Glitch Mob which I think is going to be pretty darn magical. We partnered with The Urgency Network to provide a prize for their Festival Ninja project. They create ultimate experiences around music and festivals to drive awareness of social change nonprofit efforts — things that may not be so fun to talk about but are more exciting coupled with the idea of riding in a hot air balloon.

Tell us about the Monarch program. It’s a reincarnation of our king and queen program. We got some feedback that the name seemed too prom-like and that fans wanted it to be a bit more open. It’s based on the quote “the flutter of a butterfly’s wing can cause a typhoon halfway around the world.” So we view the Monarch winner(s) as a role model for the community, not a popularity contest.

And this year’s winner is… This year we selected Queen Karlene as the winner. Her idea was to help people discover new things in the Forest that you may not otherwise find — morning yoga, the silent disco, another cool spot not on the map. She’s developed #EFQueensHunt, a scavenger hunt that will help people discover even more magical things in the Forest. One fan will win tickets to Electric Forest 2015 by participating in the hunt. It’s another avenue for discovery and she’ll be rolling around in her pimped-out golf cart finding magic and sharing it.

What advice would give to a first-time attendee? The most important thing to do in advance is to understand this is an experience like no other. You’re going to find so many things about our community and about yourself that you’ve never discovered before. Find all the different pieces you need in advance to keep your mind and body healthy when you come out to the festival — stay hydrated, be moderate in alcohol consumption, etc. It’s going to be a wild ride. If you need help or have questions or are just excited, join the community on Facebook or Twitter – there are lots of experienced foresters with tons of knowledge, and I’ll be there to chime in, too!

Once you get here, take care of yourself and then, just go. You can’t really plan the experience.