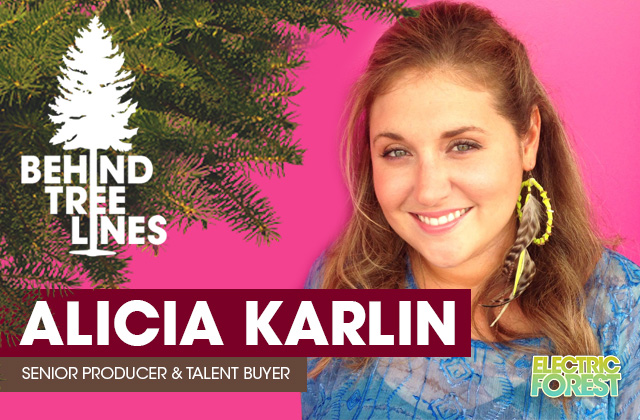 But Alicia Karlin’s up for the job.

Alicia is a senior producer at Madison House Presents, the brains behind Electric Forest. She’s been with the company for nine years and is the head talent buyer for the festival and other Madison House-produced events.

We caught up with Alicia to talk more about her role with Electric Forest and the work that goes into building a lineup for the annual event, which kicks off this weekend in Rothbury, Mich.

How do you begin to put together a lineup each year? There are a lot of different factors. I first try to look at what’s worked in the past. Obviously String Cheese Incident is a foundation and staple of the festival and they’ve played every year, both at Rothbury (the festival’s original name) and Electric Forest. We book headliners further in advance, almost eight or nine months in advance so we have to think ahead to figure out who’s going to be great for our fans that following summer. Beyond the so-called headliners, I try to book stuff that’s a little left of center or different from what’s on every other festival. And we try not to rely just on big talent. We went on sale before a lineup was released this year and we sold a lot of tickets so I think people are trusting in the overall experience and that we’re going to deliver a lineup that they are going to want to see. I think people will be excited about some of our curated projects this year, like Deep in the Forest, a deep house and Nu Disco stage.

Is there a formula to balance the electronic vs. jam talent you feature? There’s no strict formula. But the schedule and the way the stages are laid out kind of create a natural flow. Ranch Arena and Sherwood Court are suited for live acts and big electronic shows. Tripolee is mostly electronic, small footprint acts, and DJs. The Forest Stage and Observatory are both bigger this year so they’ll be able to host DJs or band setups and it kind of flows throughout the day with more live band, jammier acts early on and as the evening approaches it becomes more up-tempo electronic.

Who are you personally looking forward to seeing this year? I’m really excited for Cut Copy. I haven’t seen their live show in a couple of years but the last time I did it was in a small club and it was amazing. I also can’t wait to see Zedd on the main stage. That’s going to be a huge show. I think our Deep in the Forest feature is going to be awesome. Soul Clap is one of my favorites. And then we have just a lot of cool others like Penguin Prison and Cashmere Cat.

How much influence does Insomniac have, if any? They definitely have influence. I work with their head talent buyer and we collaborate all the time. Madison House handles all the booking directly but we talk a lot during the process. Electric Forest is different from the other Insomniac shows but they’re definitely a partner on it. They know exactly what’s happening in the dance world so that’s really useful for us.

There’s an ongoing rumor circulating that String Cheese is leaving and Pretty Lights Music is taking over. Any comments on that? Only that I don’t know where that rumor ever started. Madison House Presents and Insomniac are the partners on the festival so that’s really all there is to that. We’re now moving into our fourth year and were going to deliver a great experience, a great atmosphere, and of course great music.

What’s the biggest obstacle for you? There are a lot of festivals in the US and everyone is competing for similar headline talent and booking further and further in advance. Artists doing summer tours in amphitheaters and radius clauses on a lot of events has also made it tougher. You just have to be creative, follow your gut and bring in who you think the fan base is going to appreciate come time for your festival.

Is that driving up the cost of talent? Competition always tends to drive up the cost but there are plenty of variables. A lot of it is based on tour history and ticket sales. Budgets drive things as well. For Electric Forest, the headliner is the Forest itself and that takes a lot of money to produce.

What do you look forward to the most at the festival? I love getting to see all the acts and having everyone be able to come out and check out the show. As years have gone by, more people from the industry have made it a staple event for their companies. A lot of managers and agents attend to check out up and coming talent and that’s a huge compliment to the festival.

Any advice for a first-time attendee? Don’t let the stage schedule dictate how you spend all your time. There’s so much going on in the festival and I encourage everyone to wander around and find all the different things happening in the Forest. There are secret spots and locations off the main path that have really exciting things going on.