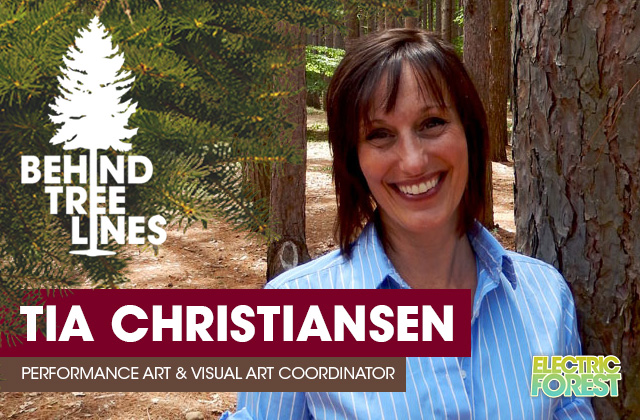 Whether you’ve spent time staring at the majestic clock tower, dancing in the “Salun,” or conversing with an unidentifiable creature, it can feel as if you’ve been transported to another planet while roaming through the Sherwood Forest.

It’s clear to see the incredible impact visual and performance art can have on one’s overall festival experience. And Electric Forest’s Tia Christiansen knows exactly how to create the perfect combination of interactive and passive art that can be enjoyed by everyone.

We caught up with Tia to talk about her role curating visual art pieces and imagining up the characters who roam the grounds.

Tell us about how you got started with Electric Forest. I’m fortunate to have had an existing relationship with Madison House Presents. I helped out with a lot of the theatrical presentation for the String Cheese Incident. I was also involved with both years of Rothbury (the original name of Electric Forest) and worked with Jeremy Stein to develop a lot of the visual art as well as the performance art program there. Both items have carried over to Electric Forest.

What process do you go through to curate all the visual and performing art pieces? It involves lots of phone calls and lots of emails. It’s really a year-round project. I’m continuously in conversations with various artists and people who are interested in providing special effects. Visual art has shifted over the years and it’s transformed into items that are more tactile and interactive. Long gone are days of a static art piece were people just stand and look at it. People are wanting to feel involved with the event and we can do that in a number of ways with performance artists and our approach to visual art.

Usually there is a particular thematic approach visually that’s a macro, overarching theme and then from there I speak with artists to generate new partnerships from across the country. Not everyone’s a van Gogh but people don’t need to be and that’s the point. We try to offer a platform for people of different skillsets and backgrounds to come to the event so we can make it a very eclectic presentation. 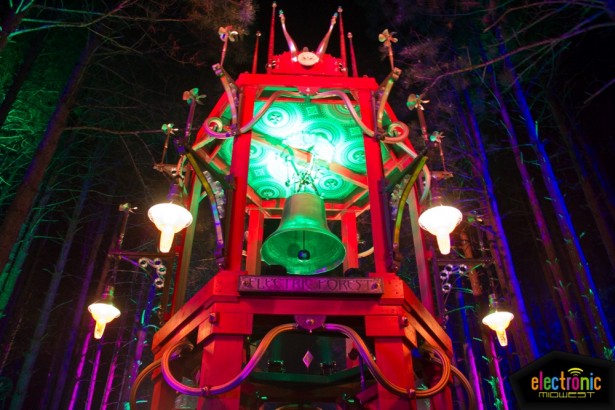 What have been some of your favorite installations over the years? I really enjoy the clock tower and the bell tower. They’re incredibly imaginative. We’ve been very fortunate to partner with an organization out of Chicago called Collaboraction and they’ve connected us with a lot of great artists, including Doc Sanjurjo who designed those two pieces. He’ll have a new installation this year as well.

Of course the observatory last year was a brand new installation…sort of an activity center…and we were all incredibly pleased with how that turned out. The vision Jeremy had for that space sparked a lot of imagination for a lot of people. We have a great amount of people bringing smaller scale installations that provide fans an opportunity to take a more hands-on involvement.

EL.E.PHANT was another favorite form last year. It was the hand painted elephant we had done by an amazing artist named Shrine who also had an installation in the Forest last year as well. She was really, really popular with fans — lots of photographs!

We loved the Salun. Is it coming back this year? It is!

What’s the toughest part of your role? There are so many amazing proposals that come our way so the toughest is having to choose which ones will actually be able to join us. There is so much imagination and so much excitement so it’s really challenging to whittle it down to a list of who we can curate this year. We all struggle with that.

Are the artists typically paid to bring their installations or do they volunteer? It’s a combination of both. Both Madison House Presents and Insomniac are strong supporters of artists. They both feel very strongly that the visuals and performing artists are on par with our musical artists on stage. We’re lucky that they allocate the budgets so we can bring in these amazing artists. We also do have ticket trade scenarios with some artists, particularly for proposals that come in after the deadline. More often then not they say yes because they want to be part of creating the magic. And often then we’re able to get them into the Forest the next year in a different kind of way. 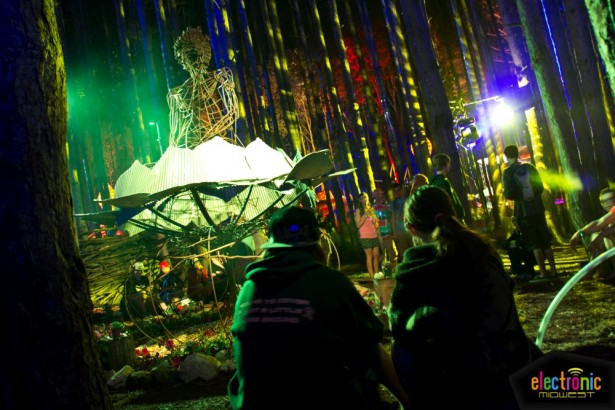 What’s your personal favorite part of Electric Forest? It’s the diversity of options. It doesn’t matter if art is interesting to you, because it’s all around. And you can’t help but interact with it at some point. Either that is at a stage enjoying your favorite music artist and seeing the very detailed presentations of our stages, or passing through the Forest and you stop at the art bar and you perhaps create something, or you might encounter one of our characters and end up having a very interesting conversation with them. It can be something as crazy as an alien life form walking with a yeti holding a marionette. It’s that kind of visual and auditory diversity…that variety of stimulus that we’ve been able to create. If you’re just somebody that just wants to walk through, you’re still able to participate. Or if you’re someone that wants to jump in with both feet, there are plenty of very tactile ways to interact too.

Looking more at the performing artists, how do you develop the character ideas? It’s much like the visual art where I’ll often be sent proposals. My colleague Nova Han works on a lot of the aesthetics for the performers. Our primary objective is to work with these artists to not only show up and be dressed in something cool and neat but to also be in a character and stay in a character. It’s very much like going to Disneyland or Disney World. When you’re there and run into Mickey Mouse or Donald Duck, those people are always in character. We have an emotional expectation of what we want from those iconic figures and I feel like we’ve been able to create some of that same feeling at Electric Forest. Just like the visual art, fans can choose to just observe or jump right in and participate. We want to create an epic fan experience. That is my mission and that’s why I’m part of the event. 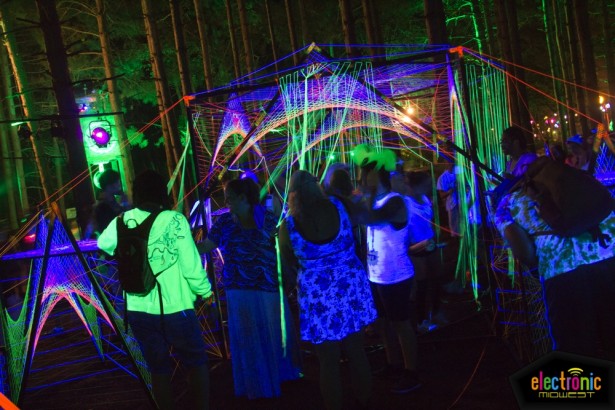 What advice would you give to a first-time attendee? Be open. Whatever your imagination can conceive is possible in the Forest. Participate! Explore!