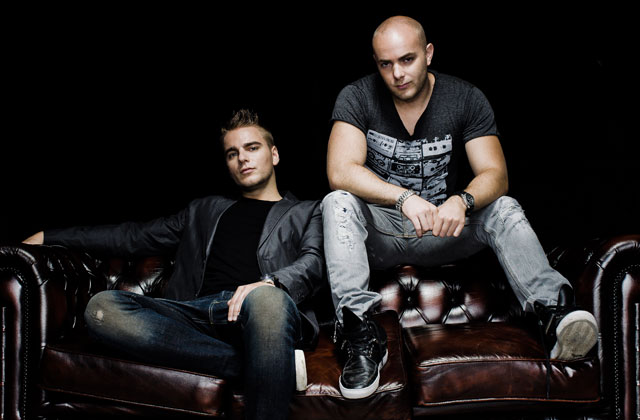 Showtek has been a major player in the hardstyle genre, which has been gaining traction in the U.S., as evidenced by the inclusion of a Q-Dance stage at last year’s Electric Daisy Carnival and Insomniac’s recent announcement that they’re creating Hardstyle-focused events and dedicating stages to the genre at existing events.

Recently, Showtek has shifted gears slightly, focusing on a more pure EDM sound which can be heard in their radio-friendly tracks “Hey!” and “Cannonball.”

The duo will also stop through Vancouver, Denver, Dallas, and New York on this tour run before returning to Europe.

We spoke with Showtek about their musical style and tour habits while preparing to hit the road. Here’s what they shared with us:

You have spent many years producing hardstyle tracks…why the transition away from that? Do you think Hardstyle will pick up in popularity in the US?

Indeed…we’ve been playing the hardstyle scene for years. In fact, because we were the first ones to go international you could say we have been opening doors worldwide. The thing that people, including our fans, didn’t realize was that as well as [producing under the alias] Showtek we have also produced music from a total different genre; working behind the scenes with people like Marcel Woods and Tiesto. Over the years our tastes changed a bit and we can definitely say we reached the ceiling with Hardstyle.

Secondly, we found that in the US, more so than in Europe, our fans weren’t open-minded enough so we couldn’t really put all our musical desires into the music anymore. Just as every person’s taste evolves in life our music has evolved from those older sounds to the one we represent today. It’s a process you go through, like when you’re a little kid you can’t wait to have a normal bike without stabilisers and then once you turn 18 you can’t wait to drive a car instead of a scooter.

It’s the same with music. It may look like a sudden change but it certainly isn’t for us, and you can still hear the Showtek touch in every track we do. It’s only a small change, but we are so much happier with what we do right now. And to be honest, the energy level has been even higher with the new music! I think everybody can understand when we say that we don’t want to be 40 and still playing the same music we’ve been playing for 20 years: that would be boring.

Something else we like to do is to produce pop songs which is what we are doing at the moment. Our career started with producing music and that’s the key to our success. So who knows what will happen. If people really dig our old sound, there are still two albums they can listen to. And if people are really crazy about hardstyle then we hope for their sake that it will take off in the USA, we just can’t tell. There’s a market for everything.

Your track “Cannonball” is in heavy rotation on SiriusXM’s BPM and has a mainstream EDM sound. Will fans hear more of this type of sound at your tour show? Or will you mix it up and revert to your roots? And overall, what can fans expect to experience at your show?

Our personal sound these days can be described as EDM, with a tendency to move towards the hard side. Our tracks are still crunchier in their appearance than the mainstream EDM sound. Did you feel the bass in “Hey!” or “Cannonball?” It’s quite heavy…we wouldn’t call that mainstream, would you?

As for reverting to our roots in our shows, you will always hear them since our roots are Showtek, and not a particular genre. But to be honest, we like the music we do right now. So yeah you might hear a few old bangers towards the end, but mostly it will be new music. We have a high energy stage performance so standing still isn’t an option!

What are three essential items you each take with you while you’re on tour?

What’s the most embarrassing/craziest thing to ever happen while performing?

Well a long time ago Wouter once messed up when mixing a song. He turned off the wrong CD player and quickly stepped back while I was still standing there. He can be such an idiot. One of the craziest and best moments was when a group of girls in Australia (all of them were hot!) wanted Showtek signed on every boob!

Food: Sushi or Thai.
Drink before a show: Jagermeister.
During the show: Water and some more jager.
After the show: Tea at the hotel, to help us get to sleep!
If we have an afterparty then there will of course be more alcohol like champagne or jager; or both!

Here’s where you can catch Showtek in an EMW city near you: