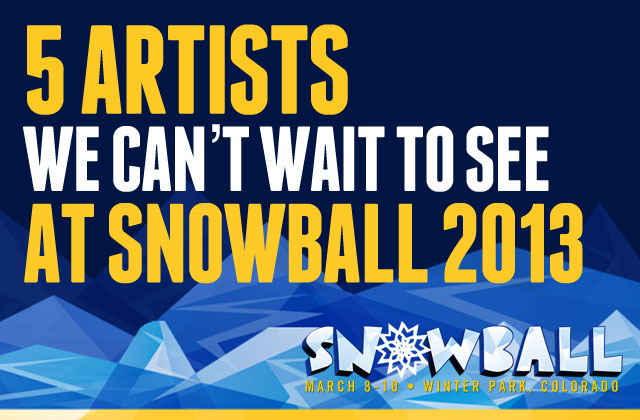 After two years in other area locations, Snowball 2013 is taking over Winter Park, Colo. this weekend for three days of music, mountain adventures and, yes, even more music.

The move to Winter Park not only promises festival goers with one of the most stunning mountain experiences Colorado has to offer, but you should also expect some mind blowing shows from Snowball veterans and newcomers alike.

This year’s lineup is incredible. With 50+ acts across three stages (not including the impressive after party schedule), I’m not sure when I’ll have time to enjoy the 61 inch base with the Snowball discount ski pass. The range of music – EDM, indie-alternative, hip-hop, and beyond – will be as vast and limitless as the range of mountains surrounding the festival.

It was a difficult task, but I’ve narrowed down the impressive line-up to the top five acts I’m MOST excited to see (in order of appearance).

Who are you most looking forward to seeing this weekend? Let us know in the comments.

This will be the first Snowball appearance for the Hill brothers from Lawrence, Kans. This electro-funk duo has instigated several dance parties in my kitchen recently, and I’m looking forward to one of their ‘epic dance parties’ to kick-off the weekend. Look for The Floozies Fri., March 8 in the Ball Room from 3:30-4:30 p.m.

This Compton, Calif. native will bring an interesting hip-hop flavor to this weekend’s EDM heavy lineup. With radio hits like “Swimming Pools (Drank)” and “Poetic Justice,” Lamar should attract a big crowd.  Don’t babysit your two or three shots, he’ll show you how to kick it up a notch Fri., March 8 on the Main Stage from 8:00-9:00 p.m..

I caught a Big G show in Omaha, NE a couple years ago, and it’s still one of the best shows I’ve ever experienced. Because this will be their first show in the state appearance since their sold out Rowdytown show at Red Rocks last fall, these Colorado natives and Snowball veterans are expected to thrown down one of THE must-see sets this weekend. You should NOT pass up an opportunity to experience Dom’s bad-ass sexyphone skills combined with Jeremy’s high energy drum beats. This once-in-a-lifetime show goes down Fri., March 8 on the Main Stage from 9:30-11:00 p.m.

Another Snowball returnee, Portugal hails from Portland, OR/Wasilla, AK. They have self-proclaimed roots in rock ‘n’ roll, but it’s difficult to label their ever evolving, indie-alternative ‘groove/soul/grime’ sound. These five gentlemen are sure to rock the mountain with a rich and evocative musical experience.  “Sleep Forever” from their 2011 album “In the Mountain In the Cloud” is also the number one most played song in my iTunes. Join me on this adventure Sat., March 9 on the Main Stage from 7:45-9:00 p.m.

Last, but certainly not least, STS9 is expected to make an unprecedented mark on the mountain this weekend. This “instrumental electronic rock band” has been around for over a decade, but this will be their first Snowball appearance. The word on the street is they’ve been bringing back some old-school favorites during their spring tour, which is sure to please all the Tribe heads – cough, my roommate, cough – who are coming. After what will probably be an explosive performance at BUKU on Saturday night, STS9 is closing out Snowball 2013 with – I’m just guessing – an extraordinary show of monumental proportions. Whatever you do, don’t leave the mountain early on Sunday! Let’s end this thing right with STS9 on Sun., March 10 on the Main Stage from 8:30-10:00 p.m.

Check out the full Snowball performer list and schedule here.

Emily proudly calls the entire Midwest her hometown. Though she’s a Colorado native, she grew up in Oklahoma and Nebraska, and was educated in Missouri. Her love of music probably began when her father sang Grateful Dead songs to her infant self, but she was already driving by the time she fell in love with electronic music – particularly the way it made her dance. Her love affair with electronic music has allowed her to dance her way through a dozen countries across four continents, but she’s proud to call Denver, Colo., her home once again. When she’s not dancing at any and every show Denver has to offer, she’s teaching English as a foreign language to adults in Golden, Colo. Connect with Emily on G+.