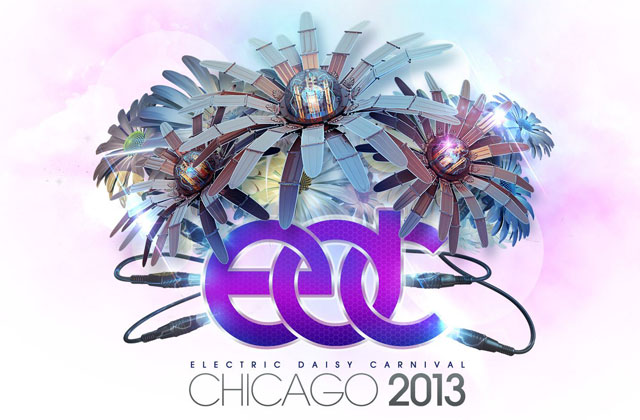 Insomniac Events today confirmed our earlier reports that Electric Daisy Carnival (EDC) Chicago 2013 is indeed being planned as part of the “Road to EDC” series leading up to its flagship Las Vegas event in June. EDC New York will also return in 2013.

In a post on Facebook, Insomniac shared a photo including artwork for both EDC Chicago and EDC New York and noted that details for EDC Chicago would be revealed Jan. 16. They have not officially announced dates or venue, though all clues point to a Memorial Day Weekend event, May 24-26, 2013.

Venue speculation continues, with the Chicagoland Speedway currently topping the list of possibilities.

If held over Memorial Day weekend as suspected, EDC Chicago will be in competition with the Summer Camp Music Festival, held 140 miles outside Chicago in Chillicothe, Ill., and Detroit’s Movement Electronic Music Festival.

This also most certainly confirms that the Future Sound Dance Music Festival, originally planned for Memorial Day weekend at Chicago’s Toyota Park, has been cancelled. Presale ticket purchasers can contact Wantickets for a refund.

This is the first time EDC would call Chicago home, though it has been previously hosted in various cities around the country including Orlando, New York, Dallas, Denver and even Puerto Rico. EDC Las Vegas 2012 attracted over 300,000 attendees.

Details for EDC New York will also be revealed in January. EDC Puerto Rico and EDC Orlando, which have also been confirmed for 2013, are likely to occur after EDC Las Vegas.

Tickets for EDC Las Vegas 2013 will go back on sale on Jan. 9 after selling over 30,000 presale tickets in just over an hour in November.