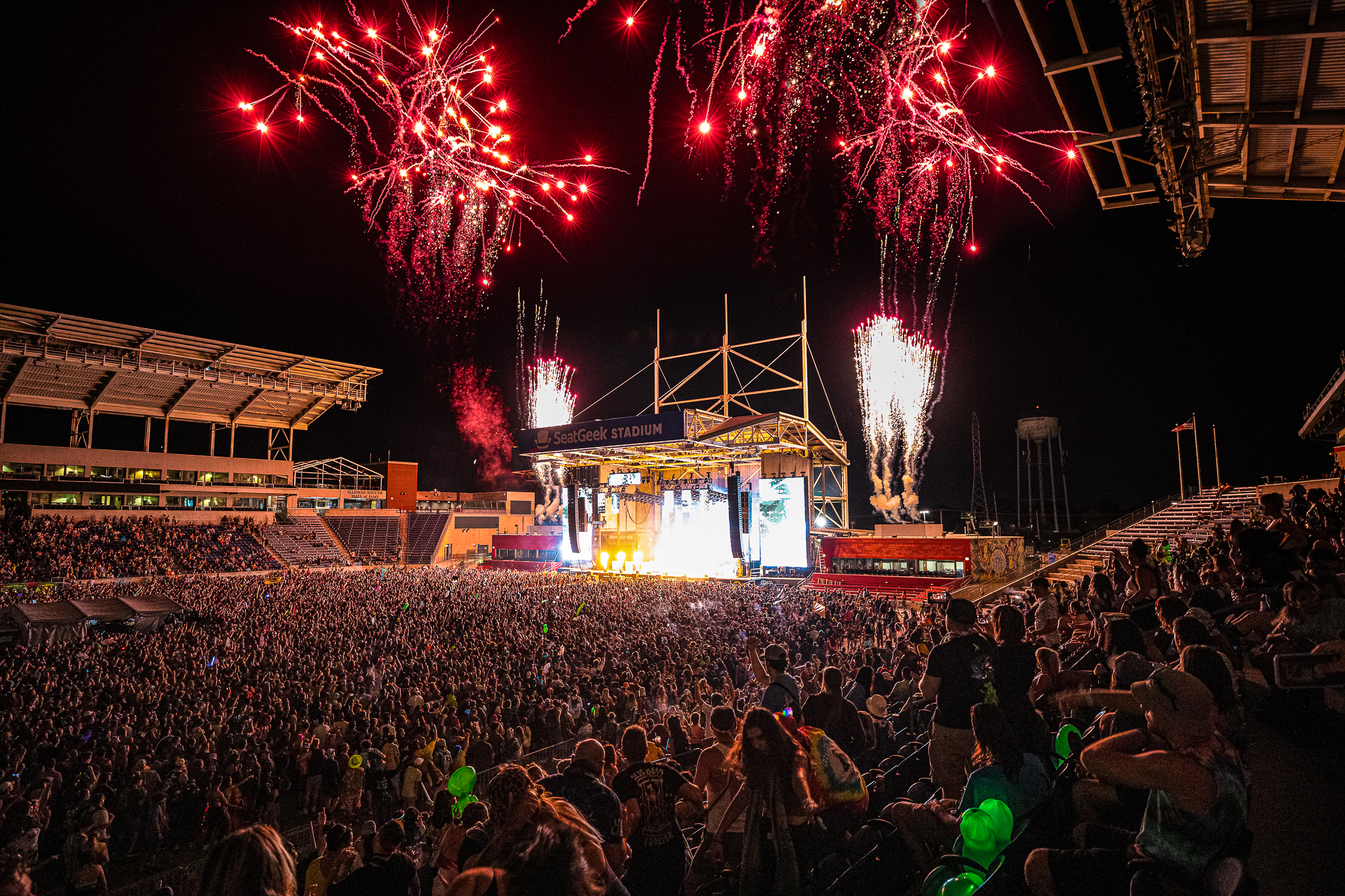 North Coast Music Festival is no stranger to the Chicago music scene. It’s been a Labor Day Weekend tradition for more than a decade.

Although Covid forced the festival’s cancellation in 2020, it successfully returned to celebrate its 11th year at a brand new location: SeetGeek Stadium in Bridgeview.

Beyond the music, North Coast was full of unique surprises. And this festival veteran — with almost 20 months since my last live music event — enjoyed every minute.

SeetGeek Stadium (formerly Toyota Park) is a soccer stadium on the edge of the Chicago metro area. It’s a slight journey from downtown and in a rather unsuspecting neighborhood, but that allows for plenty of space to spread out, and more lenient noise ordinances. 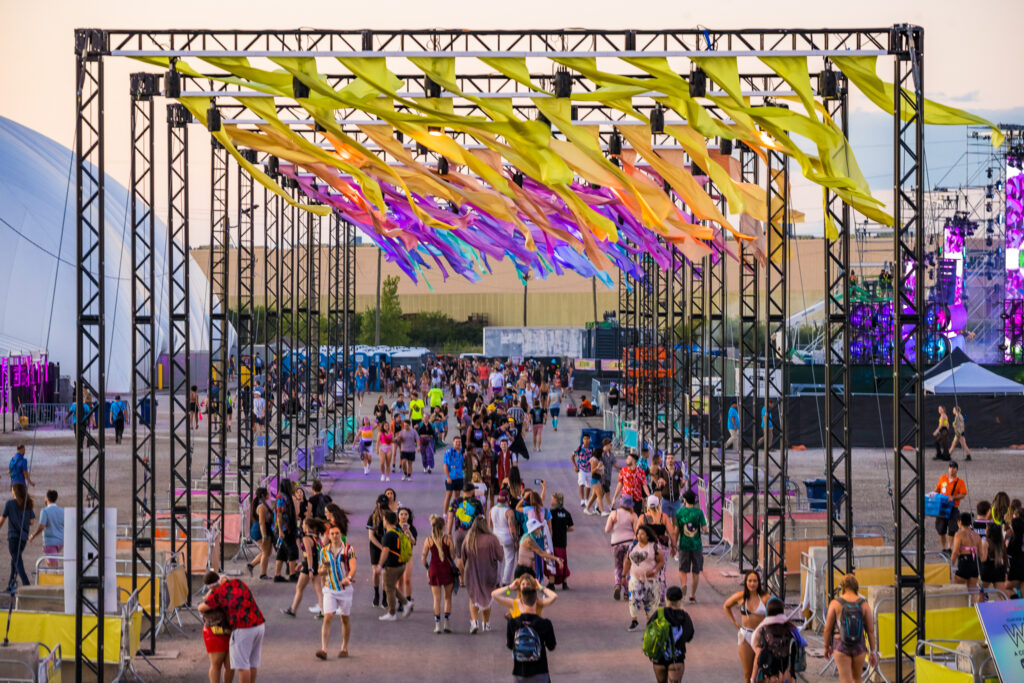 Since my schedule only allowed one day at the festival, I arrived early at 2:30 p.m. There was virtually no traffic and I enjoyed front-row parking (which was $30 if you didn’t pre-purchase).

For future reference: the venue shares a parking lot with a Hampton Inn. If you’re looking for the closest thing possible to camping onsite, stay at this hotel.

After checking my vaccination info, entry into the festival was quick and easy. Once through the gates, you’re greeted with a row of festival retail and art vendors, as well as water refill stations. The lines for water fluctuated from reasonable to ridiculous depending on the time of day. However, since the stadium has permanent bathrooms available (a major plus for many reasons), you could also refill there.

There were plenty of familiar Chicagoland food vendors, offering everything from Connie’s pizza to Quang noodles to Harold’s fried chicken. 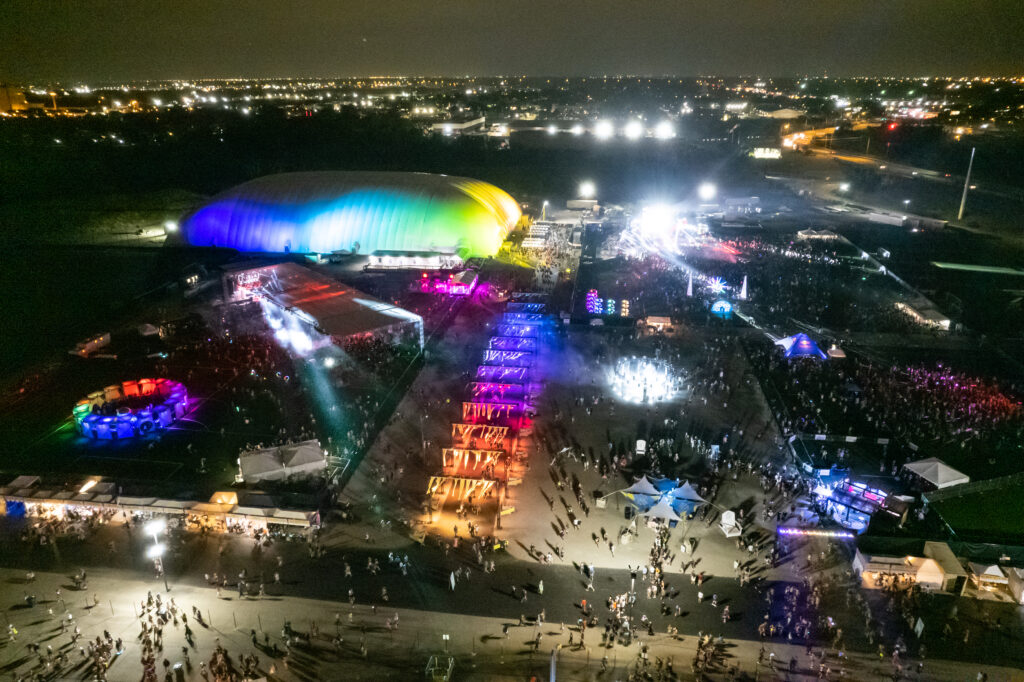 I did hear complaints of long lines to purchase drinks and congested entry into the stadium/main stage. But that’s not for a lack of bars or stadium entryways. It seemed most fans used the most visible/convenient path, but there were plenty of other options available with no waiting at all if one took the time to look around.

The artificial grass spread throughout the venue brightened things up visually, and also created a much softer dancing and walking surface.

Planes flying over the venue on their way to/from Midway was a nice unintended effect — I’d like to see the view of the show from up there.

Overall, the venue has plenty of space for this type of event, and the existing infrastructure provides major conveniences. 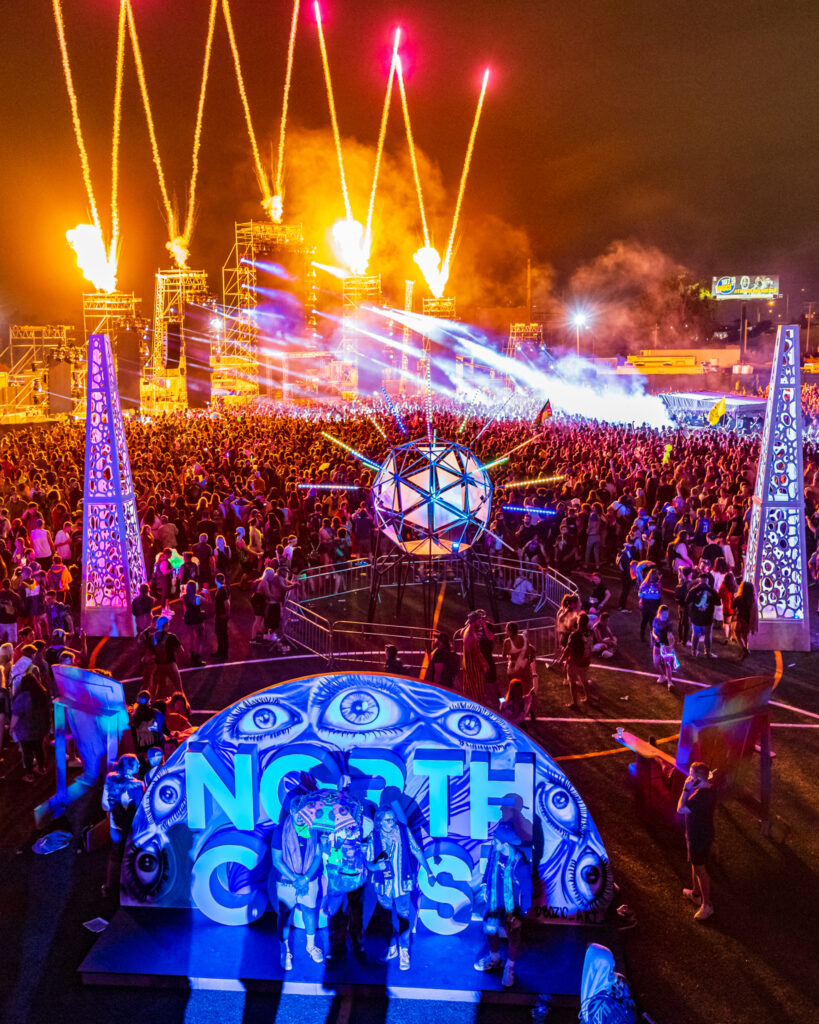 The main stage was inside the stadium itself. This provided a large dance floor, and also plenty of seating with great views of the full stage from above. The stage design was somewhat basic, utilizing the stadium’s built-in stage, but with added LED screens plus lasers, pyro effects, and fireworks. As mentioned before, there was an ample supply of permanent bathrooms and concession stands here. One particularly popular vendor on the dance floor was even serving pina coladas in real pineapples. 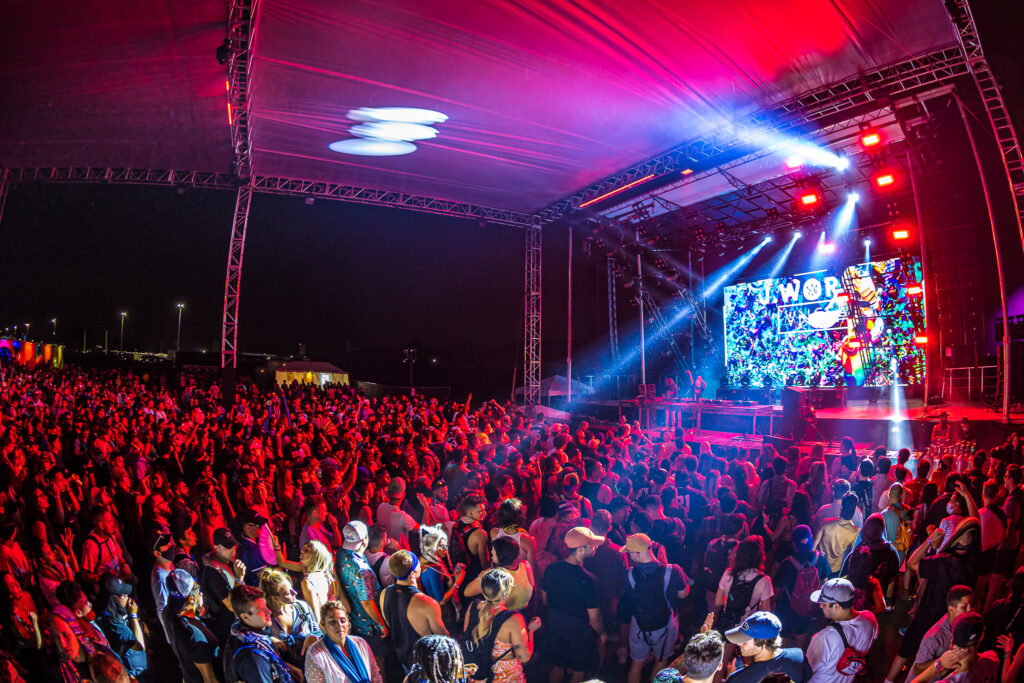 The Canopy stage was aptly named because its fabric-covered roof provided great shade from the sun during the day, and a canvas for lighting effects at night. It also featured a robotic camera that flew from one end to the other, showing live crowd video on the onstage screens.

Around the grounds were colorful flags waving in the wind, numerous LED-list geometric art installations, and a beautiful mural of flowers in the shape of the North Coast logo. A multi-sensory installation called “The Void” emitted smoke-filled bubbles during the day and after dark turned into an immersive sound and light experience.

I regret not arriving early enough to try “Deep House Yoga,” hosted by Alissa Jo at the start of each day at the silent disco. 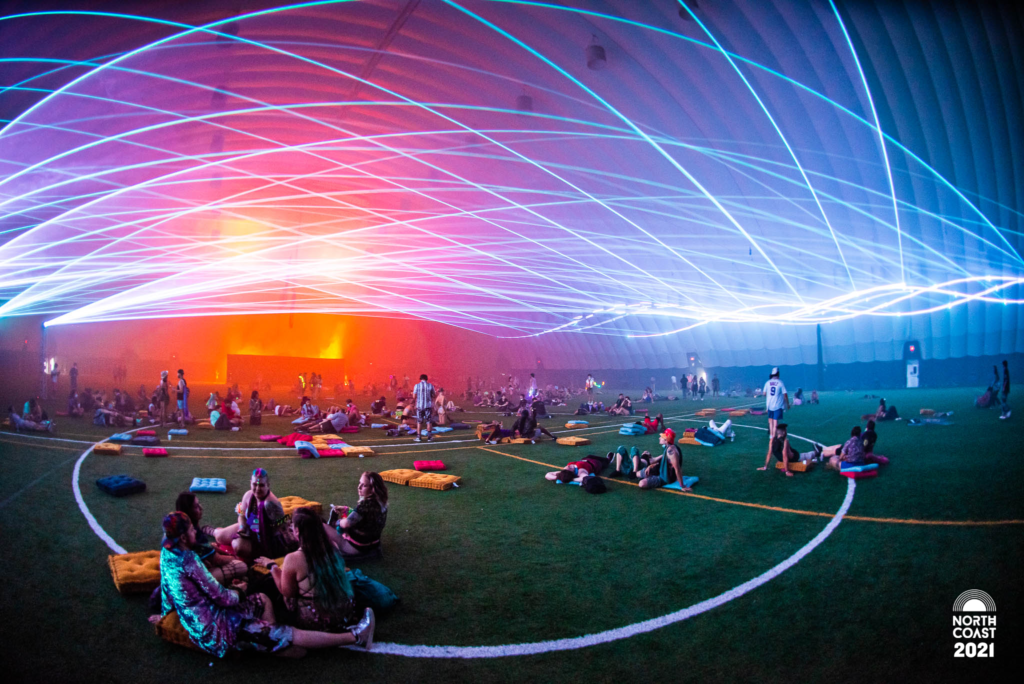 The most unique, and my favorite feature of all, was the “Chill Dome” (pictured above). The domed — and air-conditioned — soccer practice field was originally intended to be an indoor stage, but due to Covid concerns was converted to a large lounge area. It featured dim lighting and a memorizing lazer show synced to relaxing music — the perfect space to take a break from the madness of the festival outside. If this was offered as a standalone experience on another day, I’m in.

Having not been to a festival since January 2020, I wasn’t quite sure what to expect. Would the experience be better or worse than before? Would people be less social? What would morale be like considering current events?

Fortunately, besides checking vaccinations/test results at entry, it felt like nothing had changed at all. 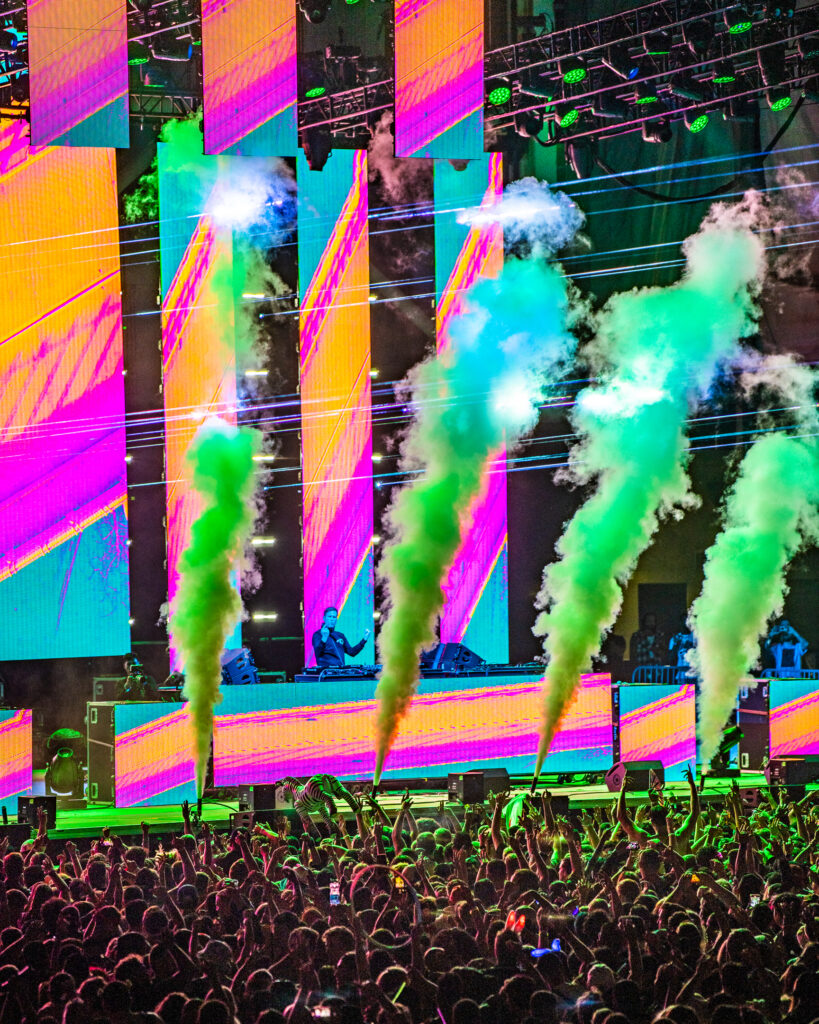 The crowd and artists were in good spirits — all just happy to have to opportunity to be there again.

I did hear stories of folks who had clearly overdone it, but that’s common for a fest of this size. It’s a reminder to watch out for one another, stay hydrated, and don’t hesitate to seek help.

Something I hand’t realized I missed so much? Seeing so many smiling faces. 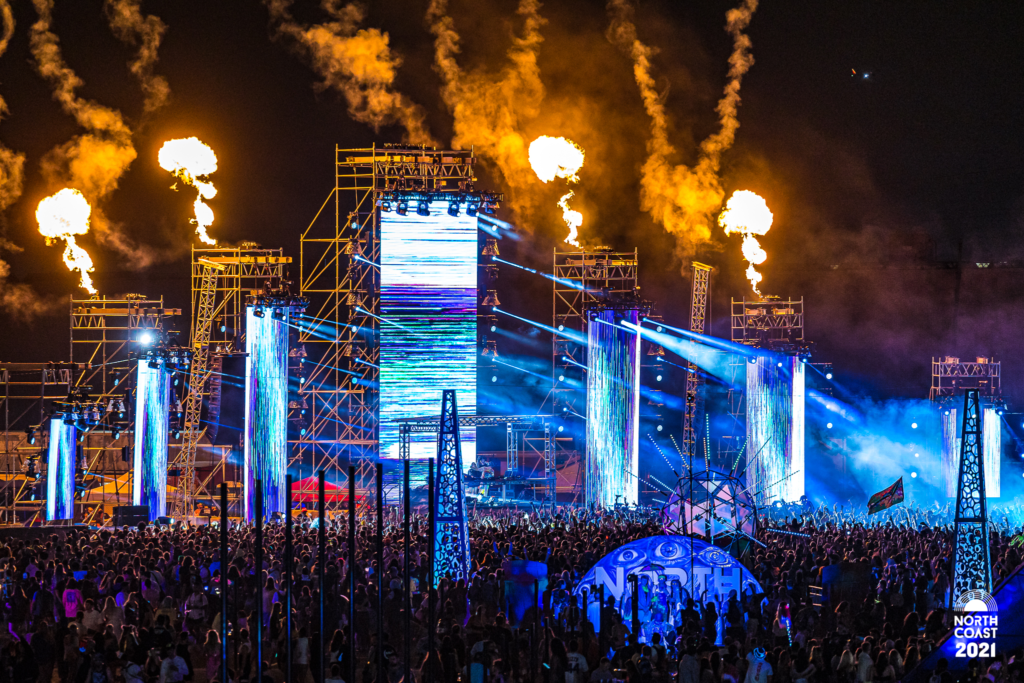 North Coast Music Festival found a great new venue to make a post-Covid return and celebrate its 11th anniversary. There was plenty of space, and the permanent infrastructure of the stadium offered conveniences not found at most festivals.

The lineup, while different from past years, offered something for almost every electronic music fan. Plus there were some rare and unplanned collaborations, including Rezz + Deadmau5.