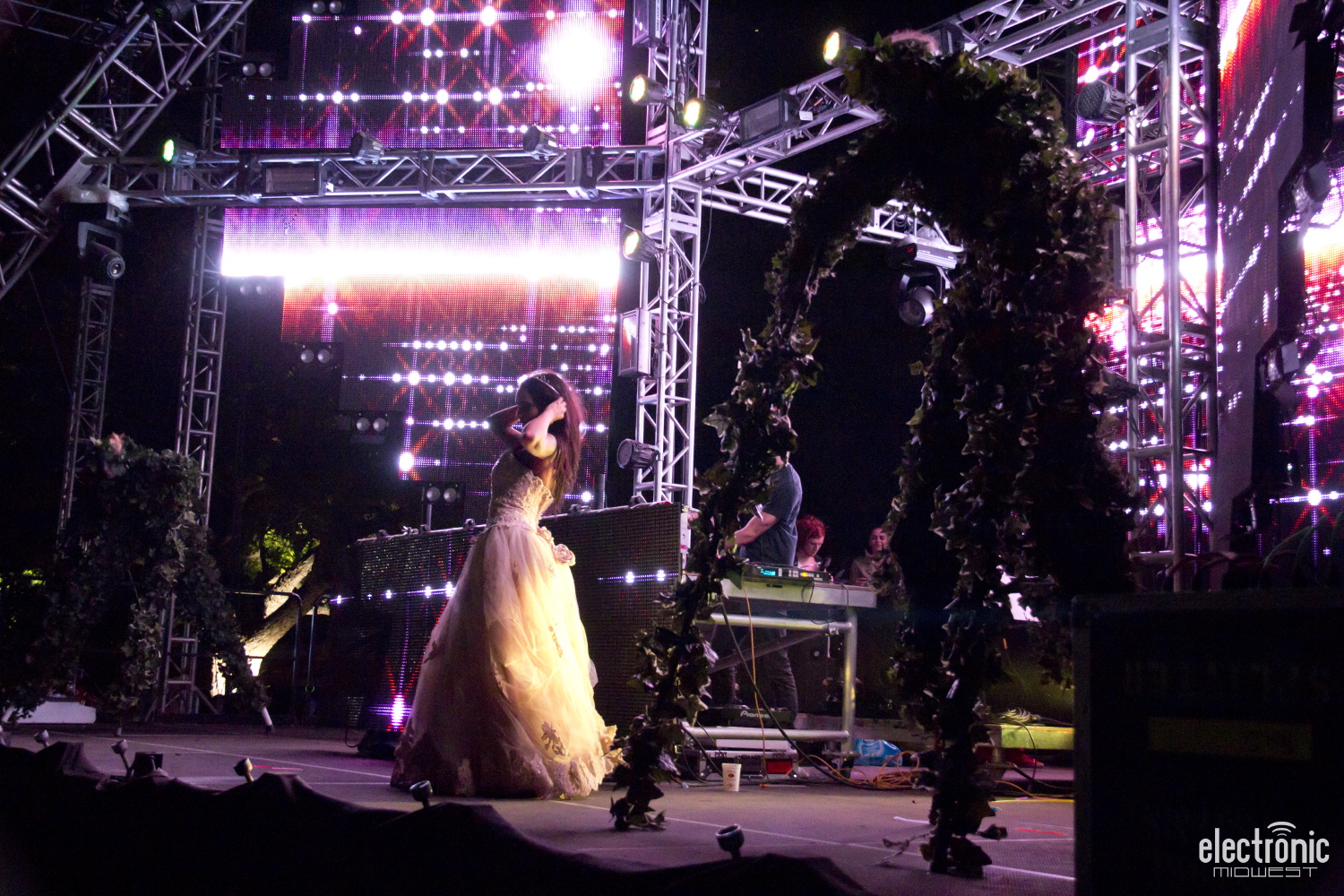 Making the 50+ mile drive from Austin to the festival grounds through high-speed two-lane roads was probably more like traveling down an actual rabbit hole than anything the festival itself could provide. But, the distance – regardless of how far one traveled – is more than worth it. Once outside the city, the true magical Wonderland arises and somehow effortlessly melts away everyday realities. 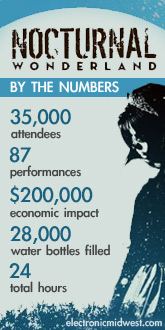 “My best friend and I definitely fell into the rabbit hole and found a completely new world that was so radically different,” explained Kelsey LeBlanc on our Facebook page. “BEST WEEKEND EVER.”

True to its name, Nocturnal Wonderland ran from 4 p.m. to 4 a.m. each night, though the grounds didn’t really fill up until the sun started to set over the festival site, nestled among hay fields and cattle ranches.

Insomniac has not mentioned official numbers but the Rockdale Reporter noted attendance topped 35,000 over the two days. From our observations, it seemed Saturday’s attendance was a bit higher, perhaps because the night’s lineup was a bit stronger.

Queen’s Ground, the main festival stage, featured an impressive pyramid-shaped truss structure complete with hanging LED panels capable of lighting up the entire stage backdrop. Names like Hardwell, Bingo Players, Sebastian Ingrosso, Steve Aoki, Calvin Harris, and Tiesto also made this the most “mainstream” stage of the four, since you’re most likely to hear radio-playable songs from these guys.

Steve Aoki, whose shows focus so much on pure entertainment was one of our favorites. Even Dillon Francis took a ride on Aoki’s infamous crowd-surfing inflatable raft at one point in the set. And, of course, a girl in the front row took a cake to the face. And loved it. Having not previously seen them perform live, we were also thoroughly impressed by Sunnery James & Ryan Marciano, Dillon Francis, and Le Castle Vania. 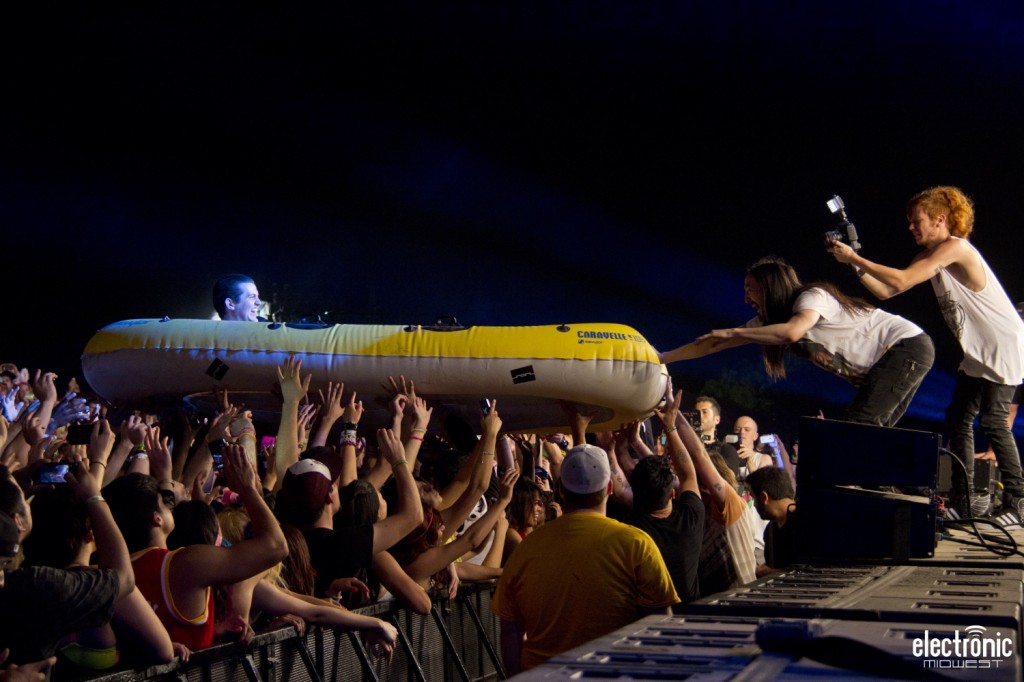 Closest to the entrance, the Labyrinth stage was home to mostly live electronica acts. Purity Ring, Royksopp, EOTO, STS9, The M Machine, Awolnation and others had no problem keeping their audience raging until the early morning hours. But our favorite of them all had to be Nero’s live performance. Seeing Nero perform live (as opposed to a DJ set) in itself is rare, but their larger-than-life stereo-shaped booth and crowd-pleasing anthems was exactly what was needed to successfully close out the festival on a positive note and leave us wanting more. 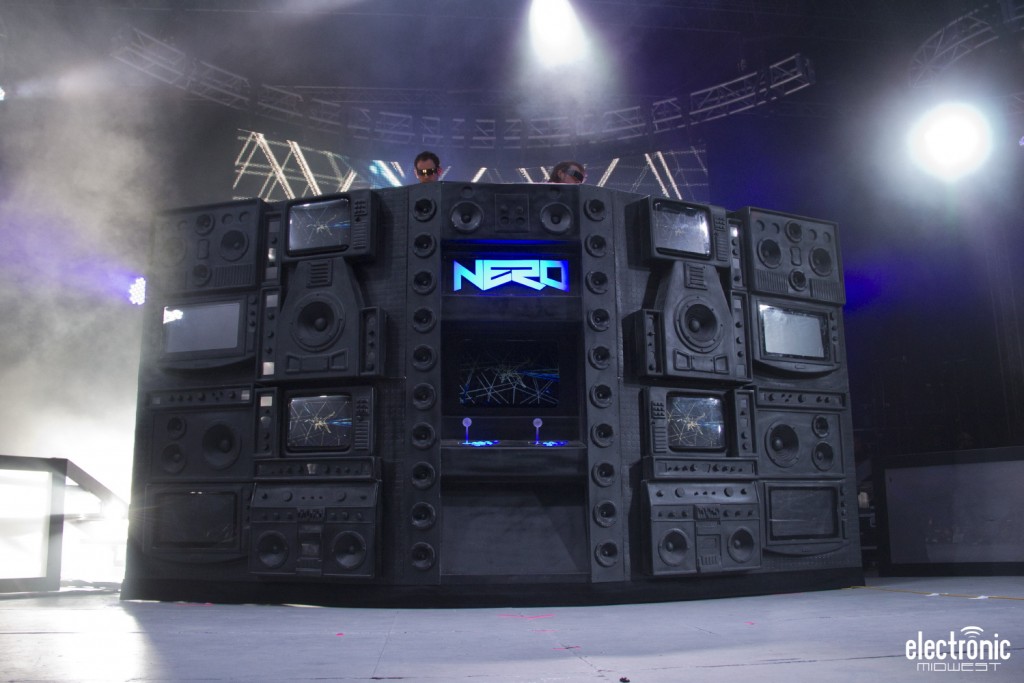 The Upside Down room, dedicated mostly to dubstep producers, was consistently packed through the entire two days. And not surprisingly with names like Datsik, Borgore, Mt. Eden, Crizzly, Adventure Club, and Pendulum. The crowd was noticeably different at this stage too: slightly younger with elaborate costumes, lots of hand-made banners and signs, and endless energy. Although plenty of intense bass is necessary for this genre, the strobe lighting and special effects were almost too over-the-top at this stage at times, which was mentioned by several attendees on one of the festival’s Facebook group pages.

Insomniac’s art car, which travels among their various festivals, served as the backdrop for the Sunken Garden stage, dedicated to local and emerging talent. With a colorfully lit wooden walking bridge swinging above, some took the chance to relax on the hill while others raged to the sounds of many up-and-coming DJs and producers showcasing their skills, hoping for the chance to play on one of the “big” stages someday.

Of course one of the more impressive aspects of Insomniac events are the stage performers who bring the music to life through costumes, props and flirtatious personality. From toxic bunnies to Alice and the walking trees to a dancing mirror man, it was easy to feel totally immersed in Wonderland, if only for a few nights. Whether an act or real, the pure happiness the performers exhibited, particularly from the “Gaga” balloon girls, was impressive considering the physical stress they were all under for over 12 hours each day. 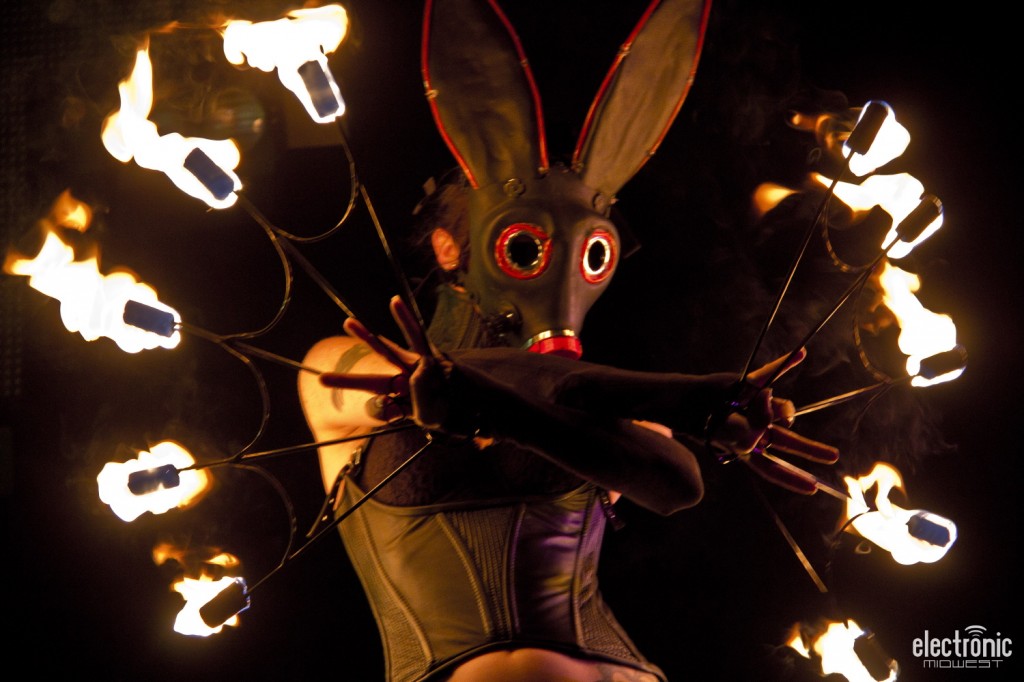 Beyond the over-sized LED-fueled flowers and the usual “Wonderland” hanging tree globes, the festival lacked the large art installations that we often see. However, the human-powered snake-shaped trolley and giant bicycle butterflies were a nice touch. Several attendees asked why the “rabbit hole” structure that’s normally onsite was missing and we’re told it was damaged in transit and sadly unable to be repaired. We’re not sure if it can or will be repaired for future festivals. However, Insomniac has hinted that they’re in the process of revamping their festival themes, so it’s possible this festival could look entirely different by next year. 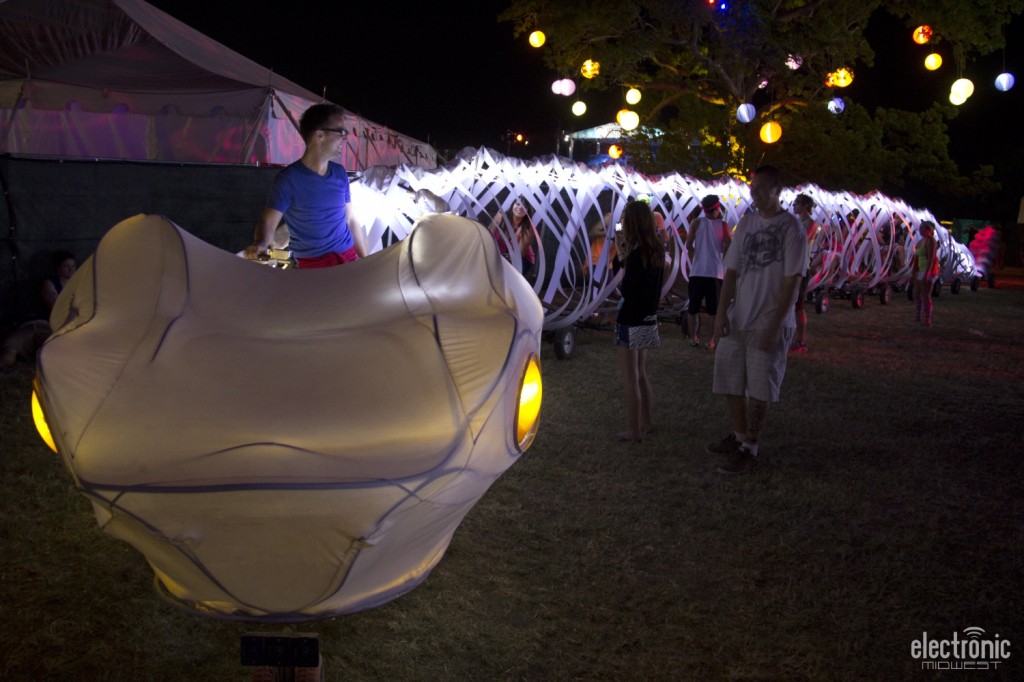 While we may have been too occupied to notice, we didn’t hear of any major security problems at the festival itself and crowds seemed well behaved throughout the night. However, we did personally see many vehicles that had been pulled over and were being actively searched while on our way to and from Apache Pass. The local law enforcement agencies were certainly on enhanced patrol and eager to hand out citations.

The Rockdale Reporter also estimated the economic impact of the festival on the local community at $200,000. This includes all the hotel rooms, meals, gas and other expenses festival-goers incur over the weekend. That’s a rather significant number for the size of the surrounding communities, and I image is ample compensation for the few days of inconvenience for those that call this area home. Many land owners nearby took advantage of the opportunity, setting up camping grounds and road-side snack shops to cater to the festival travelers.

Another successful festival for Insomniac is in the books and has only left us thirsting for more. Joseph Greenwell, via our Facebook page, summed up the experience like this: “SICKEST WEEKEND EVER! Amazing music, awesome people, great setup. Can’t wait until next year!” We couldn’t agree more.

Lucky for us, we don’t have to wait until next year to experience another Insomniac event. After all, Electric Daisy Carnival Las Vegas is just a month away!