From React Presents comes Spring Awakening, Chicago’s first all-dance music festival. The festival will take over Soldier Field at Stadium Green June 16-17 and will feature three massive stages with some of the biggest names in electronic dance music today, including Skrillex, Afrojack, Moby and countless others. This is definitely not a festival to miss this summer!

Spring Awakening was originally a one-day event held at the Congress Theater in Chicago but has since outgrown the 4,800-person capacity venue after selling out two consecutive years in a row. React Presents is also the production group behind the annual North Coast Music Festival, also held in Chicago. 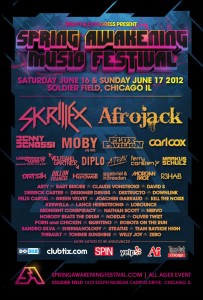 Check out the Spring Awakening website for the full lineup details.

If the lineup wasn’t enough to convince you to make this part of your summer plans, the pure ticket value surely will. This is by far one of the most affordable festivals you’ll find for the caliber of talent performing. Two-day passes are just $120 for GA and $200 for VIP.

The Electronic Midwest team will be in the windy city for this awesome festival. We hope to see you there!