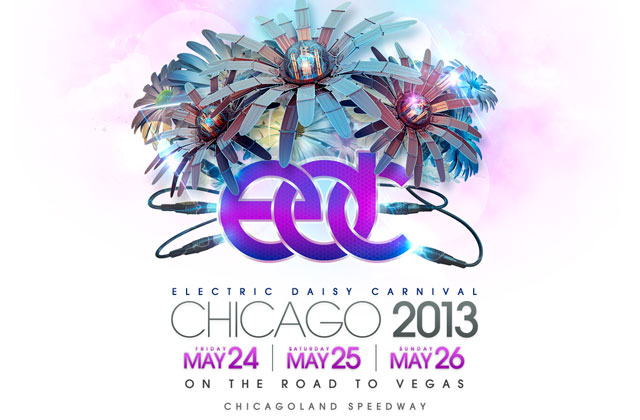 Tickets will go on sale Weds., Jan. 23 at Noon CST. Three-day GA tickets start at $175 with VIP tickets selling at $299 before service fees. A layaway pricing option will be available. (Buy tickets here.)

Today’s announcement also brought news that EDC Chicago will be the first and only EDC to offer over-night camping directly adjacent to the festival grounds. Three-day GA tickets including camping are priced at $295; VIP with camping at $419.

Insomniac CEO Pasquale Rotella hinted early on that the property size and capacity levels of the Chicago event would be similar to that of EDC Las Vegas so it’s fitting the Chicagoland Speedway was chosen as the venue with a capacity of over 75,000. Even more space and capacity is available with the addition of adjoining properties.

“As Insomniac continues to grow, our first priority is listening to our fans and they’ve made us feel confident that EDC has a home in Chicago,” said Insomniac CEO, Pasquale Rotella in a press release earlier today. “This is the first EDC that will offer fans the opportunity to camp while enjoying the festival and I know that the Chicagoland Speedway is the ideal location. I’m really excited we’ve added Chicago to the EDC family of festivals.”

The Speedway is located near Joliet, Ill., more than 45 miles outside Chicago’s downtown. This location allows EDC to extend its end time to 2 a.m., well past any other festival in the Chicago area due to noise curfews in the city limits. A number of shuttle options will likely be available from the city, in addition to on-site camping.

Lineup details will be announced at a later date. Insomniac has in the recent past attempted to put less emphasis on DJs/producers  and devote more attention to attendees and the overall festival experience.

EDC Chicago will be in direct competition with two other festivals over Memorial Day Weekend: Summer Camp Music Festival, held 140 miles outside Chicago in Chillicothe, Ill., and Detroit’s Movement Electronic Music Festival. Reaction has been mixed among fans on social media who would otherwise consider attending both if held on separate weekends.

This is the first time EDC will make a stop in Chicago — or anywhere in the region — before heading to Las Vegas for the largest event of its kind June 21-23. In 2012, EDC Las Vegas attracted over 320,000 attendees over the span of three days.

Insomniac has also announced EDC stops in New York, Puerto Rico, and Orlando in 2013, with the hint that one additional city will be added. Denver and Dallas have hosted the festival in the past but it’s not likely the event will return to either of those cities.

This could signal a resurgence in Insomniac’s presence in the region. Insomniac’s footprint outside of Southern California and Las Vegas has slowly faded in the last year while Disco Donnie Presents has taken a stronger grip on many central-US markets.