Lights All Night launches to rocky start on opening night 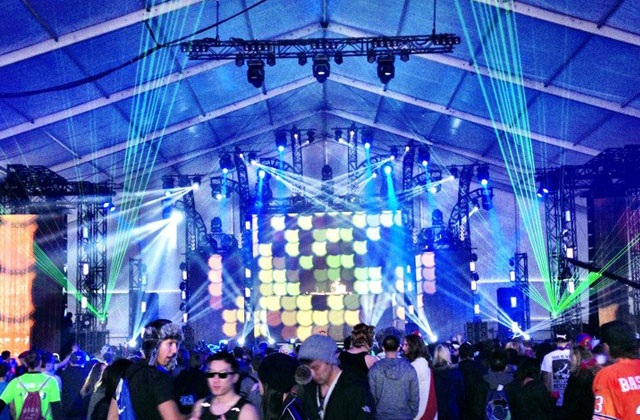 Lights All Night, the three-day NYE EDM festival, kicked off earlier this evening in Dallas, Tex. Though it’s the third year for the event, it’s the first year the event has been hosted at Fair Park, which has provided some challenges thus far.

Cold weather put a significant damper on tonight’s show, with temperatures in the upper 30s throughout most evening. Moving between stages is certainly an uncomfortable experience for most, particularly those in traditional festival wear.

Roaming among stages is also time consuming because wrist bands are being scanned at each entry and exit point. Event staff seem to be just as frustrated with the requirement. It’s understood that the festival is trying to track attendance at each stage throughout the night, but we know of no other modern festival that does this, with most employing the use of wrist-band chips to track crowd movement.

Power outages on the Hanger Stage frustrated performers and attendees alike, completely cutting stage sound and lights more than once during sets by Rhythm Monks, Nobody Beats the Drum, and Madeon. This also caused set schedules to be immediately disrupted.

This comes after many customers were already upset that the festival would end at midnight each night, having only made the news public seven days ago. Official after parties were announced for Saturday and Sunday night but festival goers are left without an option after the 12:30 a.m. hard stop on New Year’s Eve.

Despite these problems, there have already been some memorable sets, namely the main stage kickoff performance from Detroit newcomer GRiZ, Dutch trio Nobody Beats The Drum, and YouTube sensation Madeon.