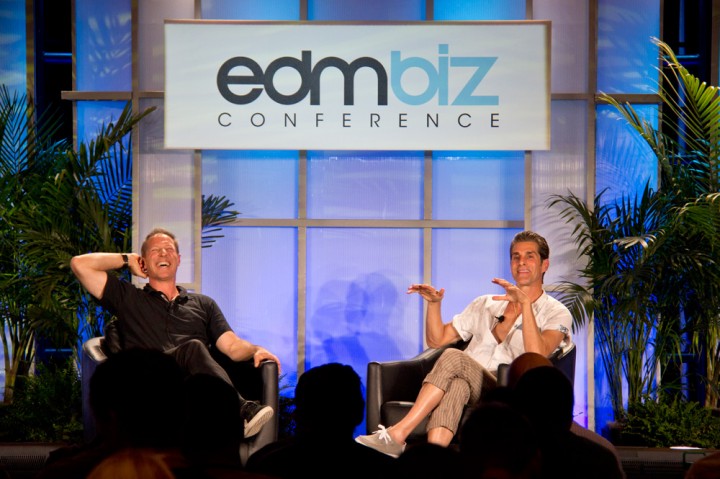 “Electronic music is not dead. The market did not crash.”

“The business has massively changed in the last twelve months,” says Geiger, referring mostly to the consolidation of promotion companies and the lack of a predicted EDM “bubble burst.”

“I’m just happy the ecosystem globally is still growing, not wildly and unchecked.”

Later joined by fellow Lollapalooza cofounder Perry Farrell, the two discussed the early days of the festival scene, the current environment, and predictions for future growth.

Geiger stressed the importance of infrastructure and fan experience for EDM’s further development.

“Post-consolidation, the creators have to get creative again,” said Geiger.

In what he called a “production arms race,” promoters and artists are trying to outdo one another for the best stage design, the best lights, the best overall sensory experience.

“The big thing now is to get the art right. There are not many DJs who are making great art that stands out from the rest of the wave.”

But a multi-sensory experience isn’t a new idea. Farrell reminisced about an idea of his that never came to fruition: an “aroma tunnel,” which would emit various smells as you wander through festival grounds.

Beyond the dazzling bells and whistles, Geiger says the experience goes beyond what’s happening on-stage. It’s also about the logistics of physically getting fans into the show and ensuring safety and ease once inside.

A recent trip to Ibiza reinforced the idea, noting that the scene’s infrastructure there hasn’t kept up with the recent demand.

“[Talking about infrastructure] sounds boring at times because it’s business, but it’s important. It makes a difference if you don’t have to wait in line as long to get into EDC.”

Geiger also discussed the challenge of making EDM easily consumable by a wider audience, commenting that the genre is tough to navigate for newcomers.

“If this were a record store, it would be a mess. People would not know what to do.”