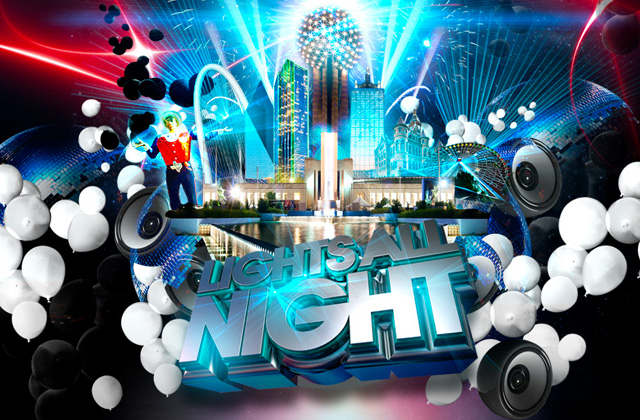 UPDATE (12/24 1:30 p.m.): Lights All Night has reposted the daily schedule graphics to their Facebook page, making them the assumed official performance set times. They’re available at the end of this article.

In an official statement late Sunday evening, Lights All Night (LAN) organizers revealed the festival — set for Dec. 29, 30 and 31 at Dallas’s Fair Park — will run from 4 p.m. until midnight each day, with a slightly later 12:30 a.m. end on New Year’s Eve. Alleged performance schedules for each day were also leaked online earlier in the weekend supporting this announcement.

The statement from “Lights All Night Management,” posted to their Facebook page, explained they had to set a midnight end time “due to sound ordinance constraints.”

Much of the response on Facebook to the previously unannounced festival start and end times was negative, with some customers asking for a refund and mocking the festival’s name, instead calling it “Lights All Evening” and “Lights Until Midnight.” Others appear to support the decision for the sustainability of the event in future years, noting the city’s sensitivity to noise complaints and Fair Park’s proximity to areas of higher crime.

Organizers have announced they will be hosting “official” after parties, which are to be announced in the coming days. There’s no word what the ticket price for these events may be.

Last year’s LAN ran until 3 a.m. both nights but was held at an indoor venue, the Dallas Convention Center, allowing for lesser chance of noise complaints.

Other festivals around the country have a variety of end times, which are typically mandated by city sound ordinances.

Almost all of Insomniac’s Southern California events held in San Bernadino run from 4 p.m. to 2 a.m. The main exception is Electric Daisy Carnival Las Vegas which runs until well past sunrise, though the event’s location frees it from many sound regulations. EDCs in other cities typically end much earlier in the night, with the most recent Orlando event ending by 2 a.m. each night.

Dallas city officials are assumed to be still apprehensive towards EDM festivals after a death and multiple injuries at an Electric Daisy Carnival hosted by Insomniac Events in the Dallas in 2011, which was forced to shut down early.

There have been a number of recent events in other cities which have been required to end early due to intoxicated minors and unusually high rates of hospital transports. A Zeds Dead show in Philadelphia was shutdown for these same reasons in early December before the performers even hit the stage.

Meanwhile, set times for Lights All Night were leaked on Saturday, though no official schedule has since been released. The LAN 2012 iPhone App denotes set times as “Time 1, 2, 3,” etc. without noting actual performance times.

The leaked set times can be found in the images below and on the LAN event page. 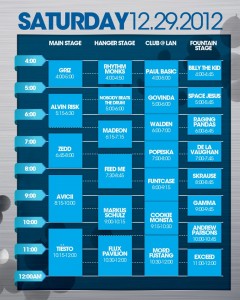 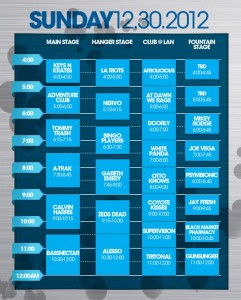 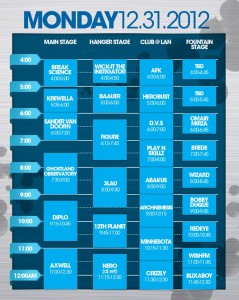