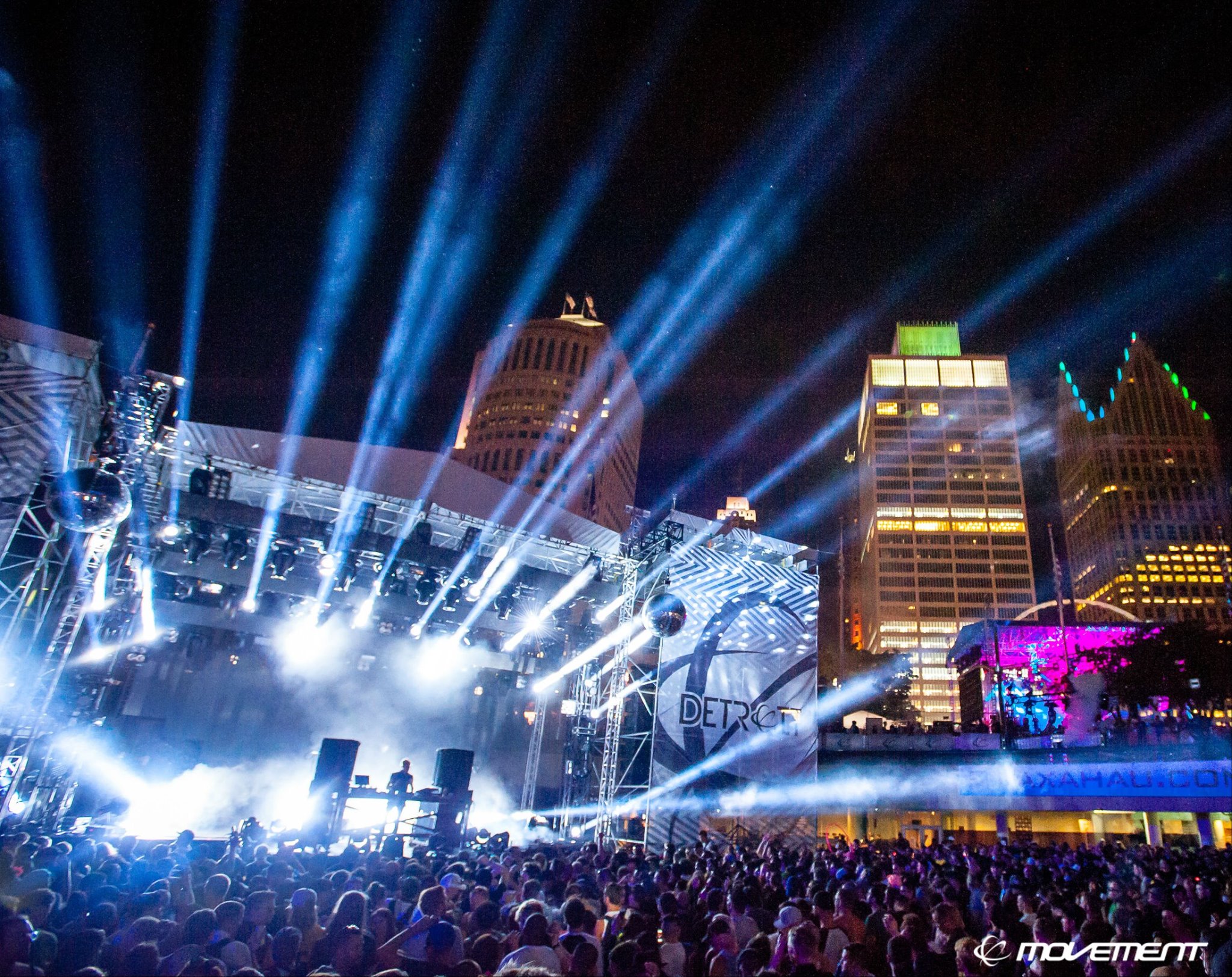 Each year the biggest names in techno and house descend upon Detroit for Movement Electronic Music Festival and its leaving no trick undone for its 10-year anniversary edition. From rising stars and hometown heroes to internationally acclaimed legends, this year’s lineup is curated with a bevy of influential artists.

The city of Detroit holds a special place in the history of electronic music and, more specifically, in its impact on the diverse sounds of techno. Movement not only caters to the niche sounds of the underground but also gives its audience an opportunity to hear artists not typically seen on lineups across country.

With such stellar performances scheduled over the course of the weekend, navigating the stages of the festival may prove to be no easy feat. Before heading out to Hart Plaza, get to know a few of the can’t-miss artist on the 2016 roster by taking a peek at Electronic Midwest’s top picks for this weekend’s event.

A limited amount of Movement festival tickets are still available.

Kraftwerk – 3-D (Saturday, 10:30 p.m., Movement Main Stage)
Legends in their own right, Kraftwerk created a solid foundation for the electronic music world since their start in the 1970’s. The group pushed the boundaries of production with their audio-visual experimentation. Using a variety of innovative techniques and state-of-the-art visuals, Kraftwerk creates a spectacle to be seen and heard.

Dubfire:Live Hybrid (Sunday, 10:45 p.m., Movement Main Stage)
Boundary pushing and forward-thinking are two phrases that could accurately describe the Iranian-born producer and owner of SCI+TEC known as Dubfire. Taking over the Movement Main Stage, Dubfire will explore the realm of where technology meets sound with the premiere of his live show, which debuted in 2014 at the Amsterdam Dance Event.

Richie Hawtin (Monday, 8:30 p.m., Red Bull Music Academy Stage)
On Monday, the Red Bull Academy Stage will showcase the PLAYdifferently Prototypes Tour curated by techno ambassador Richie Hawtin. The Minus label owner has taken to stages all over the world to spread his love of techno and regularly contributes to making sure the genre pushes the envelope of live production with his involvement in projects like the making of the MODEL 1, a mixer co-designed by Hawtin for PLAYdifferently.

Kyle Geiger (Saturday, 5:30 p.m. Underground Stage)
When it comes to techno heavy hitters, many probably wouldn’t consider the state of Indiana as a breeding ground for a prolific artist, but Kyle Geiger is proof that talent can be found in the most unlikely of places. A regular on labels such as Drumcode, Cocoon and Sleaze, Geiger has produced a large collection of both harder, dark tracks, as well as dance floor ready hits for the club scene.

Ectomorph – Live (Saturday, 8 p.m., Opportunity Detroit Stage)
Detroit duo Ectomorph is not only performing a prime spot at this year’s festival, but their label, Interdimensional Transmissions, will be hosting a showcase of Motor City’s talent on the Opportunity Detroit Stage. Ectomorph brings a plethora of gear to their performances and their new show is all analog, so fans can expect a truly unique live show.

Maceo Plex (Saturday, 8:40 p.m., Movement Main Stage)
If there’s one thing rising superstar Maceo Plex is good at, it’s seducing his crowd with deep tech-house beats. Catapulting to international recognition following his 2011 release on Crosstown Records, the Barcelona-based producer proves his versatility with each performance as he takes his crowds on a heartstring-pulling musical journey filled with melodic harmonies, and dark and soulful track selections.

Marc Houle – Live (Saturday, 8:30 p.m., Beatport Stage)
Techno veteran Marc Houle has been captivating audiences worldwide with his live performances for over a decade. Influenced by the music scenes in Detroit and Chicago, the Items & Things label owner brings a mix minimal techno, new wave and house to each set.

Job Jobse (Sunday, 2 p.m.)
Job Jobse found his love for electronic music scene within the walls of Amsterdam’s Club 11 nightclub and has since gone on to play the stages of Burning Man, Panorama Bar, Glastonbury and Fabric London. His shows provide a sultry groove that will prove perfect for fans looking for a solid house set to start day two of the festival with.

Loren (Sunday, 3:15 p.m., Opportunity Detroit Stage)
A resident DJ at Detroit’s beloved TV Lounge, Lauren Vellucci, better known by her stage name Loren, has been making a name for herself in the underground scene across the U.S. for years. The 21-year-old DJ/producer spends her days working at Motor City’s beloved Detroit Threads, where she finds new digs and inspiration for her performances. The up-and-comer has shared the stage with notable acts such as Eddie C, Guillaume, Alton Miller and more.

Honey Soundsystem (Sunday, 4 p.m., Red Bull Music Academy Stage)
San Francisco-based group Honey Soundsystem has dedicated its career to bringing a mix of music, art and performance to the stage. Finding inspiration from the gay underground parties of their home city, the group of four has added to the rich music scene of Northern California and beyond by throwing elaborate parties, even scoring a year-long residency in house music hotspot, Chicago.

Adam Beyer (Sunday, 9 p.m., Movement Main Stage)
One of the industry’s most globally recognized artists, Adam Beyer is not only a DJ and producer, but also the head of three record labels including the massive Drumcode Records. In addition to playing stages all over the world, Beyer has taken the club scene by storm with his take on modern techno and has arguably become a true power player in the genre.

Hito (Monday, 2 p.m., Beatport Stage)
The final day on the Beatport stage is filled with banging techno as it plays host to the PLAYdifferently Prototypes tour. Fans of the genre should make plans to get to the festival early with Hito opens with a special two-hour set. The Berlin-based DJ has been Richie Hawtin’s right-hand gal for his ENTER. series since its start in 2012.

Marshall Applewhite (Monday, 6 p.m., Opportunity Detroit Stage)
Bringing a harder edge to his music, Marshall Applewhite brings a breath of fresh air to the music scene as the self-proclaimed “anti-drug of EDM.” Attracted to the darker sounds of Detroit techno, Applewhite helped pioneer the sounds of sludge techno, categorized by infusing slower tempos and grimy beats.

Get Real (Monday, 10 p.m., Red Bull Music Academy Stage)
A new DJ duo is taking dance floors across the globe by storm and they show no sign of slowing down. Made up of Claude Vonstroke and Green Velvet, Get Real debuted their new collaboration in 2015 following a number of back-to-back sets at festivals and clubs. A funky mix of house and techno, Get Real’s is sure to deliver a high-energy performance to close out Movement 2016.

Modeselektor Live (Monday, 10:45 p.m., Movement Main Stage)
German duo Modeselektor is not only making a rare appearance in North America with their performance at Movement, but they’re also performing live, another rarity for the electronic group. Not confined to one genre, Modeselektor brings the sounds of electro, hip-hop and experimental techno to the forefront of each performance.