Lollapalooza — hands down, one of the most recognizable music festivals in the world — attracted thousands of tank-top wearing, smiling music lovers to Chicago’s Grant Park Aug. 3-5 for a weekend filled with an amazingly diverse lineup of live music, festival fellowship, and even a surprise mass evacuation (thanks to mother nature).

For it’s eighth year in Chicago, Lollapalooza hosted over 130 artists and a staggering 270,000 attendees over the three days.

Lolla is known for showcasing not only the popular artists of today but also plenty of up-and-coming talent from a variety of genres, including alternative, indie rock, hip-hop, and electronica. A host of artists over the years have noted Lolla and after party performances as key career tipping points.

This year, EDM was given its chance to shine as it dominated the lineup at Perry’s Stage, named after Perry Farrell, the lead singer of Jane’s Addiction and the brains behind the original Lollapalooza. Given the rising popularity of dance music, Perry’s Stage attracted some of the biggest names in EDM and crowds large enough to sell out arenas on any other night. 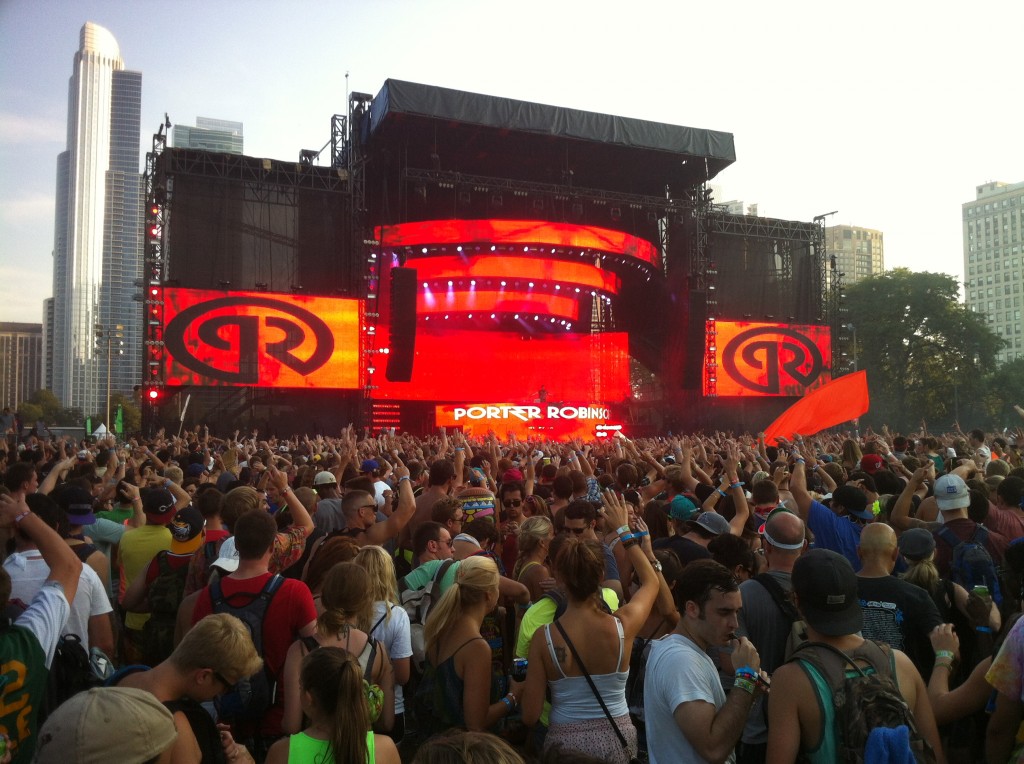 While we of course focus on electronic music here, I have a passion for music of all formats. And having never attended Lolla before, I took the opportunity to roam around the festival to see many different performances and experience the dramatic variation of crowds and energy at each stage.

Here’s a rundown of the highs and lows of the weekend based on our first-time experience.

MUSICAL VARIETY: From the Black Keys to Fun. to Kaskade to Florence + the Machine, there was certainly a wide variety of musical genres showcased. You could plant yourself at one particular stage for the full day or roam among them to catch some of each.

EASY ENTRY/EXIT: Entering and exiting the festival grounds is something that can take near hours at other festivals, but rarely was there a line at all to enter the grounds. If you exited at the end of the night it took a bit longer to meander through the crowds but enough city streets had been shut down to easily facilitate the size of the crowd. Also, if you had a 3-day pass, you were free to enter and exit as many times as needed per day.

RECYCLING: Though I’ll touch on the trash problem below, there was a conscious effort to encourage recycling. Plastic bottles were also replaced with milk-carton-like boxed water containers, which I had never seen before.

LOCATION: Grant Park is located right off the water and next to all the Chicago downtown has to offer. There’s easy access to all modes of public transportation and it was a short walk to restaurants/shops/nightlife spots. The park itself is also beautifully landscaped, though at times I felt like I was at a street fair more than a festival considering the towering building surrounding us.

BATHROOMS: Though portable bathrooms were the only option, at least here were plenty of them around the grounds.

WiFi: We all know how difficult it is to get cell phone service when at a festival of this size. Having free WiFi was great, though even it seemed to be bogged down by too many users at times.

FARMERS MARKET: In addition to the traditional food stands serving festival eats, there was a farmer’s market area setup allowing locally sourced food and products to be purchased. This proved to be quite popular as almost all of the stands sold out of food by early evening. 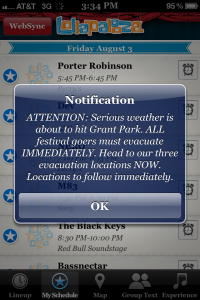 FOOD: There was just as much variety of food as there was music. Lined almost up and down the entire main street, food vendors were offering fried festival favorites, BBQ, pizza, burritos, desserts, and even a few lighter healthier options too. I also appreciated the consistency in the signage for each food stand so you knew exactly what food was offered and how much it would cost.

COMMUNICATION: Festival organizers did a great job keeping attendees updated with schedule changes throughout the festival via the mobile app. I’ve seen plenty of these but none that sent push notifications. It was almost like having a personal assistant sending me text messages when a time or stage changed. Also, this was crucial in alerting the crowd when it was time to evacuate for the storm (read more on this below) and where shelters were located.

LOLLA”BRO”LOOZA: There was certainly a different attitude among the attendees than you’d find at an electronic festival. That’s understandable considering most of the true PLUR ravers likely didn’t shell out the cash to attend a festival that only featured one stage of dance music. Regardless, I got an overall cold feeling from most people and I witnessed lots of pushing and shoving and heard reports of some significant violent acts on the festival grounds. Where is the love?

TRASH: Despite the efforts of paid cleanup crews and grassroots efforts, the pileup of trash sometimes reminded me of days in third world countries. I’m not sure what festival attendees are thinking when they just carelessly throw trash on the ground. Is this what they do at their own homes? Possibly I suppose…but one would think our generation would have a better appreciation for the environment and respect for their fellow festival attendees. This is obviously not exclusive to Lollapalooza (as Electric Daisy Carnival was worse), but it seemed more noticeable on the pavement.

LACK OF STAGE PERFORMERS/EFFECTS: This is where the EDM festival really shines…but not at Lollapalooza. Of course, The Black Keys probably wouldn’t like a troupe of go go dancers frolicking around the stage while they play. And they don’t need it — their stage presence is enough to keep the audience engaged. But for a DJ, there’s only so much you can do while you’re twisting knobs and clicking a touchpad. It would have been great to see just a little more production effects on Perry’s Stage beyond the typical LED screens.

END TIME: I know this is out of the control of the organizers because of curfew restrictions in Grant Park, but a 10pm end time is just too early. Especially for the EDM crowd. Luckily, there were plenty of after parties sprinkled across the city that went well into the early hours of the morning if one had the energy left to attend.

THE STORM: This is almost a high and low because it certainly provided some excitement and entertainment. But having to evacuate the entire property on Saturday afternoon due to a severe storm entering Chicago was surely a bummer because most of the acts scheduled to perform during the evacuation never got the chance to go on stage. Luckily it only delayed the festival for a few hours and all were allowed to return after the storm passed. It did make for some great impromptu hotel lobby performances and the ability for festival goers to share “where were you when the storm hit” stories. Also, plenty of people found use for the many mud pits left after the storm. 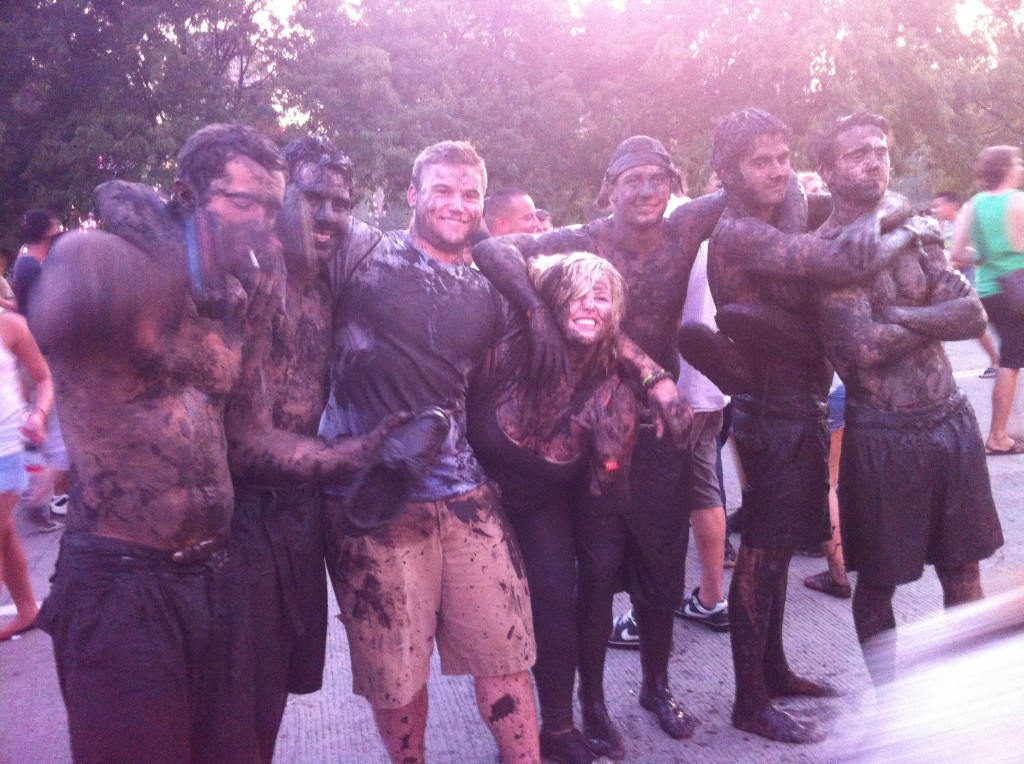 Lollapalooza attendees making the most of the situation after Saturday's storm.

Should you plan to attend Lollapalooza 2013? It depends. If you want to see bands and artists from a wide variety of genres and be able to roam among the performances, then definitely yes.

But, beyond the music there’s little left. Don’t expect to be wowed by ridiculous production or walk away with the warm and fuzzy feeling we get at so many great electronic festivals around the country like Electric Forest or Electric Daisy Carnival. If you’re a diehard EDM fan, you’re better off saving your money to attend a different festival.